click on name or picture to go to Rekowski Family Tree 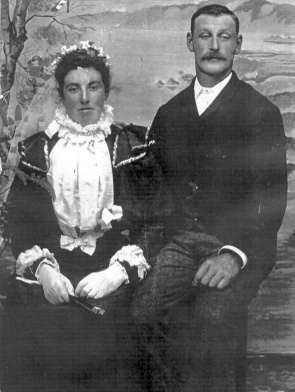 Listed aboard were: Franz Reikowski age 39, Johanna 39, Paulina 9 and August 11 months. The family was sent south to Scroggs Creek on contract work with Brogden and Sons to lay the southern railway through the Taieri. The family soon moved to Waihola where they had the youngest member of the family—Rose Mary (b. 1876–d. 1949). According to the 1882’ Return of Freeholders, Francis owned two acres to the value of £100 in Waihola and 83 acres to the value of £207 in the Milton area. It is said the sod chimney of his house at Akatore was still standing during the 1980s. Francis was engaged in farming all his life and owned a small farm at Loudens Gulley where he was reputed to have been very careful and thrifty. He was naturalised as a New Zealand citizen on 26 June 1912 while residing at Loudens Gully. Julia died at Milton on 31 July 1893 aged 59 and Francis died at Raurekau on 20 November 1920 aged 87. Both are buried at the Fairfax Cemetery near Milton.

Paulina (Polly) Rekowski was born at Stanisławie on 04 November 1859.  She married on 14 October 1896 at St. Mary’s in Milton to Francis Joseph Barra (b. 31 October 1858 at Gniszewo–d. 1932), the son of Peter Albrecht Bara (b. 1827–d. 1904) and Eleonora Wilhelmina Maas (b. abt. 1828–d. 1909). Polly carried a vivid recollection of the journey out to New Zealand and from all accounts it is clear that she enjoyed every minute of it. During a water shortage on board the Palmerston, she was approached by the captain and offered all the water she desired in an exchange for a kiss. She laughed it off as only a 14-year-old teenager could. The family born at Waihola were: James Francis (b. 1898–d. 1979) and Herbert Peter (b. 1899–d. 1993). The family moved to Loudons Gully where Polly died on 2 December 1942 aged 83 years.  A Requiem Mass was held at St. Mary’s church in Milton and she is buried with her husband at the Fairfax Cemetery near Milton.

“MILTON NOTES. PERSONAL. Mr and Mrs A. Rekowski, who have been resident in Akatore, Glenledi, and Milton district during the past 50 years, will leave tomorrow to take up their future residence at South Dunedin.” Otago Daily Times, 17 March 1927, p 7

August died at Moneymore on 18 October 1943 aged 72 and is buried with his wife at the Andersons Bay Cemetery in Dunedin.

“Obituary.—The sudden death occurred at Moneymore, near Milton, on Monday evening, of Mr August Francis Rekowski, an old and well-known resident of the Tokomiairiro district. He came to New Zealand as a baby in 1870, and his family settled at Glenledi, where he was educated. He later worked on Wain’s Estate, Glenledi, and in 1886 married Miss Mary Ottrey, and they settled at Akatore. where deceased farmed until 1921. and then moved to Milton. He was a very enthusiastic gardener, and also took an active part in all local functions. He was predeceased by his wife in 1927 and is survived by two sons and three daughters —-Messrs Francis (Methven), George (Tokoiti), Mesdames L. M. Carruthers (Moneymore), M. McNeill (Palmerston). and Miss Marion (Dunedin).” Evening Star, 22 October 1943, p 4 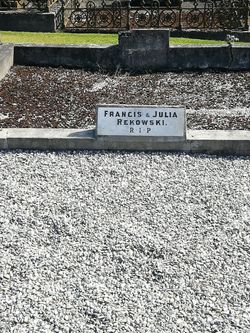