click on name or picture to go to Plewa Family Tree 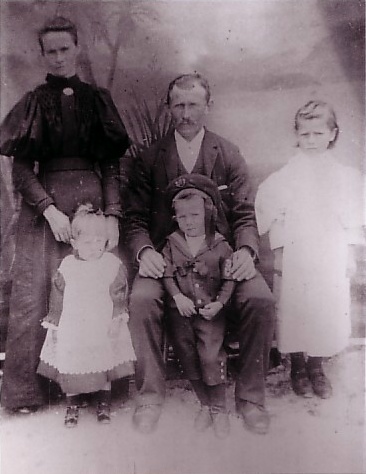 Listed aboard was—August Plewa age 24, Francisca 31, Franz 2 and Angelica 6 months. The family was sent south to Scroggs Creek on contract work with Brogden and Sons to lay the southern railway through the Taieri. The family moved first to Waihola then south to Akatore where August built a sod cottage. Here he worked for Mr. Wayne as a farm labourer. The family were John Patrick (b. 1874), August Michael (b. 1875–d. 1935), Joseph (b. 1878–d. 1944), Julius Thomas (b. 1881–d. 1954) and Francis (b. 1889). According to the 1882’ Return of Freeholders, August owned two acres to the value of £100 at Akatore. They moved to Milton where August worked as a labourer and was naturalised as a New Zealand citizen on 15 September 1887. During one of the big floods, August and Frances were marooned in their house in Albert Street upon the kitchen table until a rescue party arrived. August died at Milton on 20 September 1913 aged 65.

“100 Not Out!” Miltons’s Centenarian. As announced in last issue, Milton’s oldest inhabitant—Mrs August Plever, of Cargill Street—celebrated her 100th birthday on Thursday, and was the recipient of congratulatory messages and telegrams in honor of the important event. The Governor-General (Lord Bledisloe) telegraphed “I send you warm congratulations and good wishes on the attainment of your hundredth birthday, and trust that you are still keeping well.” The Premier (Mr G. W. Forbes) wired; “Accept my hearty congratulations and good wishes on the celebration of your 100th birthday. May you enjoy many more years of good health.” A telegram from Mr P. McSkimming, M.P., read: “Hearty congratulations on your 100th birthday. May God’s blessing rest upon you. Sincerely trust that your lum will keep reeking for a when yet. Kind regards.” In celebration of Milton’s first centenarian a happy birthday party was held at Mrs Plever’s residence on Thursday evening, and attended by large number of relatives and friends. Amongst those present were the Mayor and Mayoress (Mr and Mrs Jas. Gray) and W. J. Cockburn. The Mayor extended official congratulations to Mrs Plever, and in happy speech on behalf the Council presented her with a handsome eiderdown quilt. Earlier in the day Mr D. McGregor (chairman) had personally conveyed official greetings from the Bruce County Council. The birthday cake was surmounted with its hundred candles, which were lit by the honoured guest. A happy evening was spent in vocal solos and community singing. Despite her advanced years Mrs Plever enjoys good health, and was able to take active part in the birthday festivities, at which she sang two songs in her native Polish language. Although official records have become mislaid with the passing of the years, it is authoritatively stated that Mrs Plever was born at Gorshaw (Poland) on March 10, 1832, her maiden name being Frances Coskoviski. When about twenty seven years of age she married Mr August Plever in her native country. About ten years later they emigrated to New Zealand, accompanied by their young family. They journeyed per the ship Palmerston, which arrived at Port Chalmers in 1872. The husband was a railway platelayer in his native country, but in New Zealand carried out general farm labouring occupations. They took up residence at Waihola, afterwards removing to Glenledi, where Mr Plever worked for the late Mr Wayne, and he built a clay whare on the site where Mr D. Gardyne’s home now stands. From Glenledi Mr and Mrs Plever removed to Milton, where Mrs Plever has since resided for about half a century. Her husband predeceased her almost ten years ago. She has surviving family of four sons and one daughter—Mrs A. Anicich (Milburn), Jack (Melbourne), August, Joseph (Milton) and Julius (Timaru). During the big flood in Milton about ten years ago Mr and Mrs Plever were marooned in their house at southern portion of Albert Street and had to spend the night uncomfortably seated on the kitchen table until a rescue party arrived. Possessed of all her faculties and able to walk without a stick Mrs Plever thoroughly enjoyed the festivities arranged in her honour. During her lengthy life Mrs Plever possesses the unique record of having journeyed only twice in a railway train—once on visit to Dunedin and the other occasion the three mile journey from Milton to Milburn. She has made five trips around the district in motor cars.” March 1932, Bruce Herald.

Francisca died at Milton on 7 September 1934 and is buried with her husband at the Fairfax Cemetery Milton. 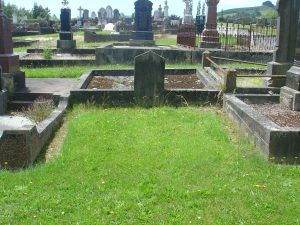 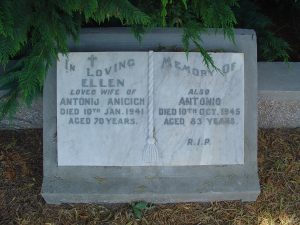