click on name or picture to go to ancestry.com

Dowaloski, Jan (1822-1899) m. Katarzyna Maicrish (1845-1920) Bologdo, and settled in Košice, Slovakia, then part of the Austro-Hungarian Empire. Family—Maria (1867-1921), Anna (1868-1899), Katarzyna (1871) & Leonore (1872-1939). Jan was of Polish origin and Katarzyna was ethnically Hungarian. The family left for Hamburg with intentions to go to Santos in Brazil but were told there was a fire on the original ship and an epidemic of yellow fever prevented any landing as the port was closed. From here it becomes a bit blurred but we do know they set aboard the ship “Prague” for New Zealand via England 5 Apr 1874. In England the family boarded the “Sussex” 16 Apr 1874, during which, their personal luggage & bedding had been overlooked and was never put aboard, there being many other families also affected. Fellow passengers loaned what little they had for the unfortunate travellers, arriving at Port Chalmers, Dunedin, 17 Jul 1874. Listed aboard was—Johann Duvalovczsky 38, Catharina (pregnant) 28, Maria 7, Anna 5, Catharina 3 & Leonore 2. It took 26 months & many letters to & fro to receive a final compensation payment to each immigrant of £3/10/- from England who continually denied any responsibility. The family first resided at Waipahi along with German families from the ship “Sussex” to work on the railway development, finally travelling south to the settlement of Germantown (Waikaka Valley). Family—Germanton; John (1875), Francisca (1878-1953), Frank (1880-1932) & Elvena Winifred (1881-1966). On 28 Feb 1878, Johann purchased 22 acres at Germantown, a subdivision of 200 acres owned by Johann Bucholz. Shortly later, John sold half of his 22 acres to John Klukowski. Shortly after 1 o’clock this morning, a two-roomed house, situated at Germantown, about two miles from Gore, and occupied by Mr Dovoloski, was, with its contents, destroyed by fire. The Victorian insurance office held a risk over the place. 12 Dec 1895 ME. Catharina Dovalosky was natuaralised a New Zealand citizen 21 Feb 1901 residing at Gore. Johan died 14 Apr 1899 aged 77 & Catharina died 28 July 1920 aged 75. Both are buried at the Gore Cemetery.
Maria Dowaloska m. William Gutschlag and died at Gore in 1921 and is buried at the Gore Cemetery.
Anna Dowaloska m. (7 Apr 1883) Gore, Johan Bucholz. Family—Germantown; Annie, Elizabeth, James, Margaret, Susannah, James, Adam & Issac. Anna died of paralysis 22 Feb 1899 aged 31 and is buried at the Gore Cemetery.
Catharina Dovaloska m. (3 Apr 1888) Gore, Thomas King (1866).
Leonore Dowaloska m. (16 May 1888) Gore, Max Hoffman (1865-1936). Family—Gore; Mary Jane, Maximillian & John. Leonore died 3 Mar 1939 aged 67 and is buried at the Gore Cemetery. 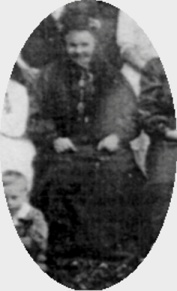