click on name or picture to go to  Orlowski Family Tree 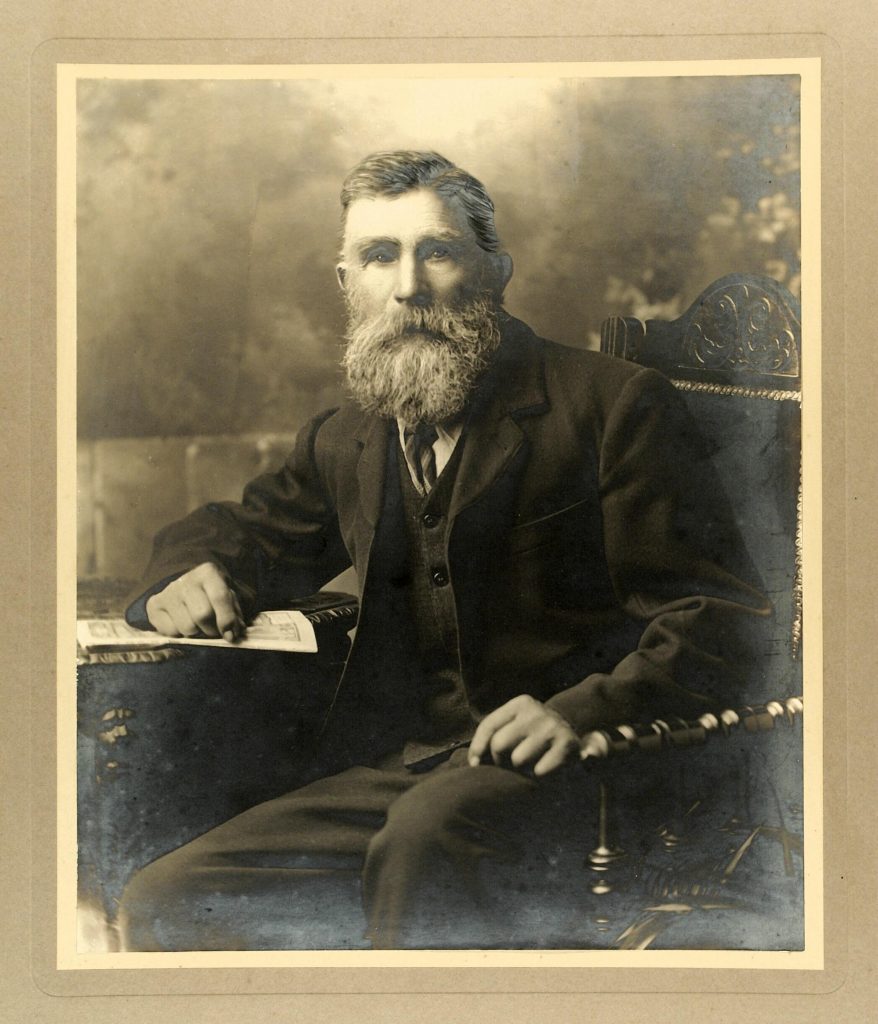 Listed aboard the Friedeburg were: J. Orlowski age 62 and Catharina (Bridget) 55. They travelled south to the township of Waihola where family had settled. Bridget was naturalised as a New Zealand citizen on 26 September 1900 residing at Waihola. Joseph died on 9 August 1895 aged 82 and Bridget died on 26 June 1906 aged 92. Both are buried at the Waihola Cemetery.

“AUGUST ORLASKI V. FRANK JANKOWSKI. Claim, £5 5s, balance due on building contract. Mr. Reid for plaintiff, Mr. Taylor for defendant. Plaintiff deposed that in December last he was employed by defendant to build a house, nothing being said as to the rate of wages. He completed the contract, which took 34½ days, and he charged 12s per day. The defendant had paid him £23 13s, leaving a balance of £5 5s still due. The defendant stated that he engaged the plaintiff to do the work at 9s per day, and that the payment of £23 13s was given as payment in full. This evidence having been corroborated by a disinterested witness, Mr. Reid intimated to the Court, that he could not ask for a verdict in favour of his client. His Worship expressed himself that the evidence was conclusive in favour of defendant, and gave judgment accordingly, with 10s 6d professional costs.” Bruce Herald, 25 Jul 1879, p 3

“Mr. A Orlowski, of Waihola, sustained a fracture of the leg last week through a log rolling upon it. He was conveyed to the hospital.” Bruce Herald, 04 Sep 1888 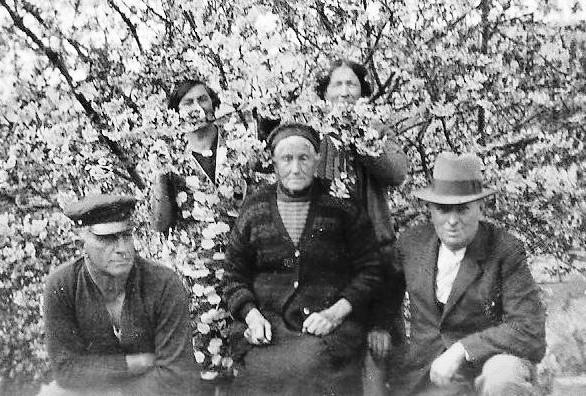 In 1899, August helped do the major work on the building of the Catholic Church, St. Hyacinth, and doing any repairs on his own accord when required. In appreciation of the work that had been done to the church, the Parish presented August with a bible, which is still in the family today. It is also noted that August helped build the Waihola Hall and was regarded as a wonderful tradesman of the old class. He had only a few basic tools and no modern machinery. August also tried his hand at farming and it is believed that his sister Annie and himself wanted to buy some land but were turned down by the council because there was an abundance of fire-wood on it. Fanny was naturalised as a New Zealand citizen around 24 February 1900, a resident of Waihola.   In 1921 August Orlowski (son of the original builder) presented to the church of St Hyacinth a water-font made of Oamaru stone.

Descendants of Bernard (b. 1882), also known as Bertrum, go by the family name Luskie. The story goes that Bertrum was cutting off pine saplings in the forest near Waihola in the company of his father, August, and one of his sons. Bertrum was busy axing away, obviously not taking too much care, when August said that he better take care or else he will lose his hand. Not taking much notice, he accidently cut off a couple of fingers from his left hand. With that August burst out laughing, seeing only the funny side. Bertrum stomped off and with that he changed his religion and name to Luskie.

“MRS A. ORLOWSKI. The last of. the earliest settlers of Waihola, Mrs Augustus Orlowski, died at Milton on Friday at the age of 91 years. She was born near Chestochova, Poland, her maiden name being Francesca Anis. A few years after her marriage to Mr Orlowski they sailed from Danzig with their two small children about 70 years ago for London, on the first stage of their journey to Now Zealand. They arrived at Port Chalmers by the ship Palmerston and stayed in barracks in Dunedin for a short time prior to removing to Waihola, where Mr Orlowski carried on the trade of a builder. Later he purchased a farming property, which he carried on till his death about seven years ago. The deceased took a keen interest in church affairs. She is survived by four sons and four daughters —Messrs Augustin (Milton). John (St. Clair), Bernard (Dunedin), James (Oamaru), Mesdames Anderson (Dunedin), Erwin (Waihola). Clark (Palmerston). and R. Tisdall (Middlemarch). ”  Evening Star, 25 October 1939, p 5

Franciszek Orłowski, who was two years old at the time, may have died on the journey out. 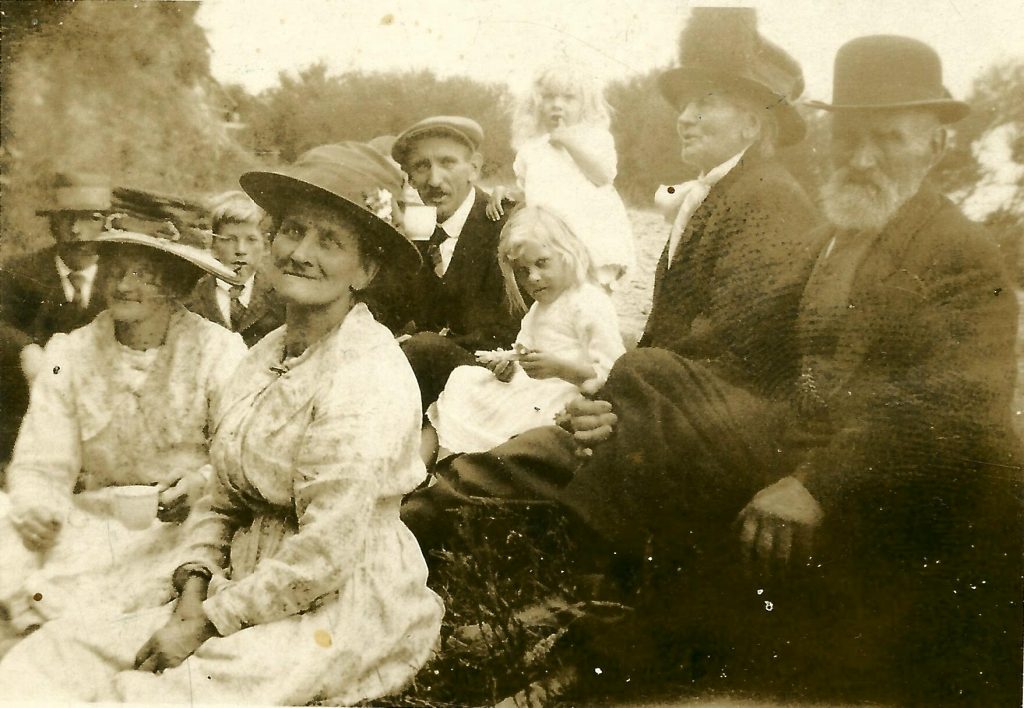 “Taieri Beach. ACCIDENT. Rather a nasty accident happened to Mr John Orlowski the other day while he was engaged leading in turnips. His dray upset and Mr Orlowski got both his legs badly crushed, but luckily no bones were broken, and I hear he is getting better.” Bruce Herald, 30 June 1899, p3

Johann and Anna later moved south to Milton where they retired. Anna was naturalised as a New Zealand citizen on 6 June 1900, a resident of Taieri Beach.  Anna died on 24 May 1925 aged 82 and John died 22 December 1927 aged 82. Both are buried at the Fairfax Cemetery near Milton. 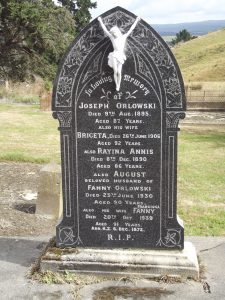 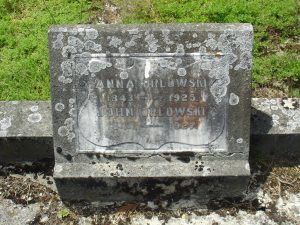