click on name or picture to go to Wiśniewski Family Tree 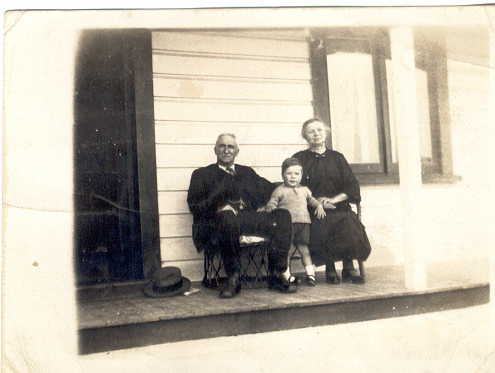 Listed aboard were: Michael Wischniewski age 37, Anna 37, August 12, Anton 3 and Bernard 11 months.  They were sent to Soames Island for isolation before being sent to Dunedin where they were sent to the western compartment of the Caversham Immigration Barracks.  From here they walked the rest of the way to Waihola where members of Annie’s family had settled two years prior.  On a small allotment which was made ready for them, Michael built a clay cottage with his bare hands.  He later built a wooden one and used the original home as a store. Here they had the rest of the family which were: Martha (b. 1875), Francis (b. 1877), Anna (b. 1878–d. 1955) and James (b. 1880). According to the 1882’ Return of Freeholders, Michael owned five acres to the value of £100 at Waihola. While employed as a labourer, Michael was naturalised as a New Zealand citizen on 13 June 1887.  Considered a real leader in the Waihola Community, he was devoted to his faith and took much liberty in ringing the church- bell on special occasions such as funerals, etc. Their home was always open to visiting priests who would be welcomed in for breakfast and where all church meetings were held. Michael would read extracts from the bible, being able to read only in Polish. When they needed a letter written in German or English, they would ask Mr. Hilgendorf, a businessman at Waihola for help and grandson, Hyacinth, remembered two such occasions.

Annie allowed no physical work on Sundays and this was very strictly observed. She was the local midwife for Waihola and was naturalised as a New Zealand citizen on 16 November 1899.  Their daughter, Anne, was the church organist and washed all the altar linen and cleaned the church. She was extremely upset when the church was moved to Broad Bay near Dunedin in 1948. She was also the local dressmaker, staying at people’s places sewing their winter and summer wardrobes. She is also remembered with huge scissors in hand being able to cut without a pattern.

“Fire at Momona. A hard case. On Tuesday night one of the Momona settlers, Mr. Wisnesky, suffered a severe loss through the burning of his house. The fire took place at 9 o’clock, and nothing is known as to the case of it. Mr. Wisneski and his wife were outside at the time, and the first intimation they had of the fire was the sight of the flames. The house was a small one, and was quickly consumed, not even a particle of furniture being saved. Mr. Wisneski’s case is a particularly hard one. He is an industrious settler, who had taken up a section in Momona, and his past savings had been invested in the building of his house and the purchase of cows. Ł5 1s 6d in cash was in the house. There was not a shilling of insurance on his property, and Mr. & Mrs. Wisneski saved nothing but the clothes they were wearing. The loss is estimated at Ł160. From what we know of the people round about Mr. Wisneski’s neighbourhood we feel sure that they will have great sympathy with him in his misfortune and assist him to the best of their ability in making a fresh start.” The Taieri Advocate, 10 February 1900 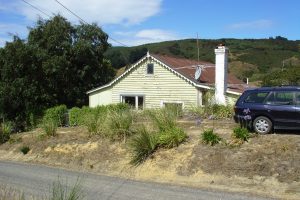 “Golden Wedding. Mr and Mrs M. Wisnesky had the pleasure of celebrating the anniversary of their wedding, which took place 50 years ago, Monday, November 9th, The elements were not too kind during the early part of the day, but in the afternoon the weather, though a trifle windy, was the finest we had had for nearly a fortnight. Early in the afternoon streams of people and vehicles were seen winding their way up and down the hill, for “The Firs;” the home of the old couple stands on a small flat half-way up Waihola hills, thus commanding an extensive view of the lake, the Taieri River, and all the surrounding country. Nearly fifty guests had assembled at the invitation of the host and hostess to offer their congratulations to the long wedded couple, and to partake of the excellent luncheon that had been provided. Three long tables groaned beneath a weight of good things, and the greatest epicurean could not but be satisfied, In the unavoidable absence of Father Farthing, Mr Hilgendorf proposed the continued health of the couple, and very enthusiastically eulogised Mr and Mrs Wisnesky for their energy, perseverance, arid, hard grit, when first they came to these parts arid made their home among us. He said it was characteristic of most his countrymen to be good settlers, and he ventured to say that no one would have made as comfortable a home out of so little and such poor country as the stock represented by host and hostess. Thirty four years ago, they had, with a number of. others, found their way to Waihola, and endured great hardships – at first, but he was pleased to say they were now in very, comfortable circumstances, and deserved everything they had got. Mr A. Wisnesky responded on behalf of his parents. Mr and Mrs Wisnesky have still near them ‘four children, of whom the three. sons, are married, 12, grandchildren and one great .grandchild.. The guests hailed from Dunedin, Berwick and Milton, but many others unable to be present sent congratulatory letters, and in many instances photos to remind them of absent friends. Numerous presents were showered on the worthy pair, and a number of gold coins. In the evening a large crowd of young people assembled in the hall, to trip the light fantastic and all went merrily until the party broke up about 3 a.m.” Bruce Herald, 16 November 1908, p 6

It is believed at the age of 70 Michael worked on the Mosgiel-Middlemarch railway to make ends meet while raising their grandchild. Michael later sold the property at the Momona Estate to his son Bernard in 1904. Annie died at Waihola on 25 December 1910 aged 73 and is buried at the Waihola Cemetery.

“Waihola. (From Our Own Correspondent). Since my last letter, two of our early settlers have passed to their rest, Mrs Carl Henke, senr., and Mrs M. Wisnesky. They both had been in delicate health for some considerable time; but had been confined to bed for a few days only, before the end.” Bruce Herald, 30 January 1911, p 5

Michael died at Waihola on 24 December 1911 aged 75 and is buried with his wife at the Waihola Cemetery. 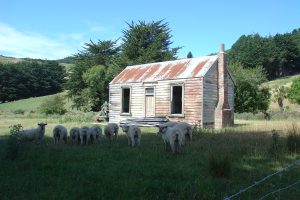 Anne Wisnesky (church organist) lived in this cottage at Waihola and was later sold to Julius Bungard, courtesy of Paul Klemick, 2015

“CASUALTIES. OAMARU. December 8. A serious accident occurred in Oamaru this afternoon, when Anthony James Wisnesky, an employee of the Oamaru Borough Council, was knocked down by a motor car. It appears that Wisnesky, who was filling in some potholes in the road in Coquet street, saw a car coming towards him. and he stepped to one side to dodge it. The driver of the car, a man named Clarke, of Eden street, swerved to the same side. Both appeared to get confused, and Wisnesky was knocked down, the wheels passing over his feet. The injured man was removed to hospital, but the extent of his injuries cannot be ascertained until an X-ray examination has been made. It is understood he received injuries to his back, besides a broken ankle and abrasions.” Otago Witness, 15 December 1825, p 37

Bernard Wisnesky was born at Małe Turze on 14 June 1873.  He married on 7 December 1898 at the Wisnesky Home in Waihola to Henrietta Kay (b. 1875–d. 1905). The family born at Waihola were: Cedric William Kay (b. 1898–d. 1944), Hyacinth Francis (b. 1900–d. 1989) Cecilia Evelyn (b. 1901–d. 1996) and Ada Katarzyna (b. 1905). Hyacinth was the first child to be baptised at the church of St Hyacinth at Waihola and recalls his grandparents, father and Aunt Anna (unmarried), looking after his sister and himself after the death of their mother while giving birth to Ada Katarzyna on 9 May 1905. The small farm his grandparents owned in Waihola could not keep the family, therefore his grandfather worked for the railways on the line up to Middlemarch. In 1907, when his grandfather was about 70 years of age, Hyacinth stayed at home looking after the 200 chickens and chopping firewood for him. Aged around ten years of age, he used to drive a horse-cart or sledge for his grandfather, collecting firewood or cutting ripe grass for grass-seeds. Hyacinth also helped August Orlowski by holding the ladder for him when he was doing repairs to the church. While at home in Waihola the old people including his father and Aunt Anna, used the Polish language. Between themselves, they spoke about Poland but never to Hyacinth. Henriette, at the age of 30, died at the home of Annie Wisnesky on 9 May 1905 and is buried at the Waihola Cemetery. Bernard died at Petone in Lower Hutt on 15 June 1947 aged 74 and is buried at the Taita Old Cemetery. 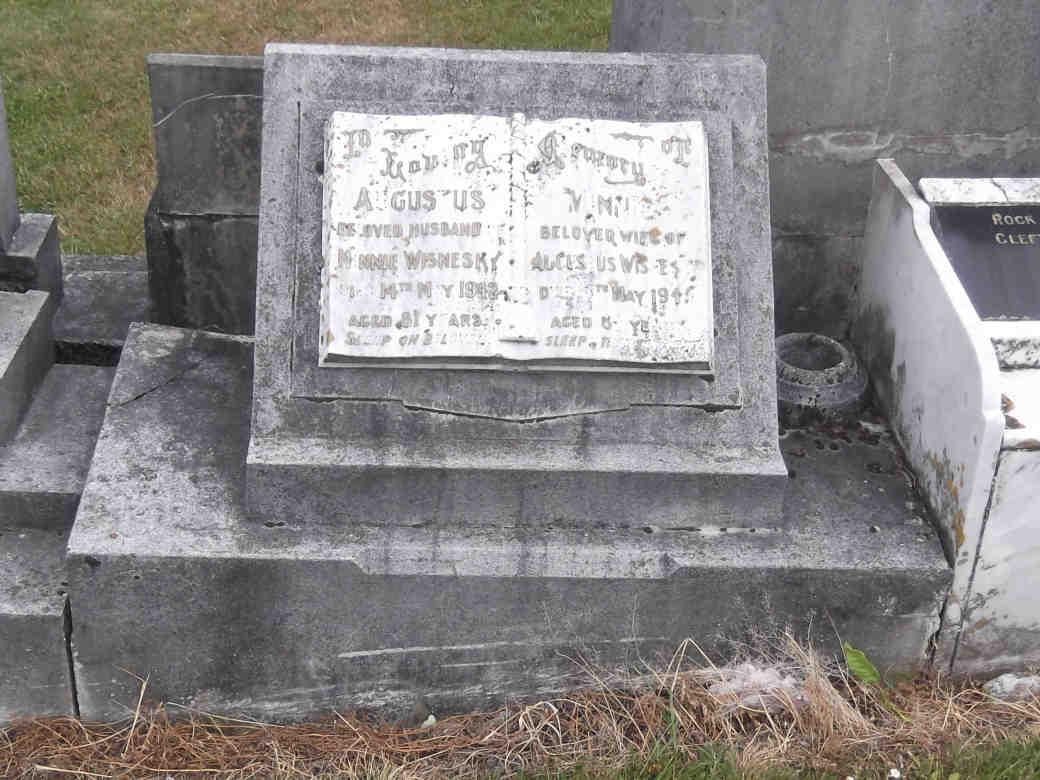 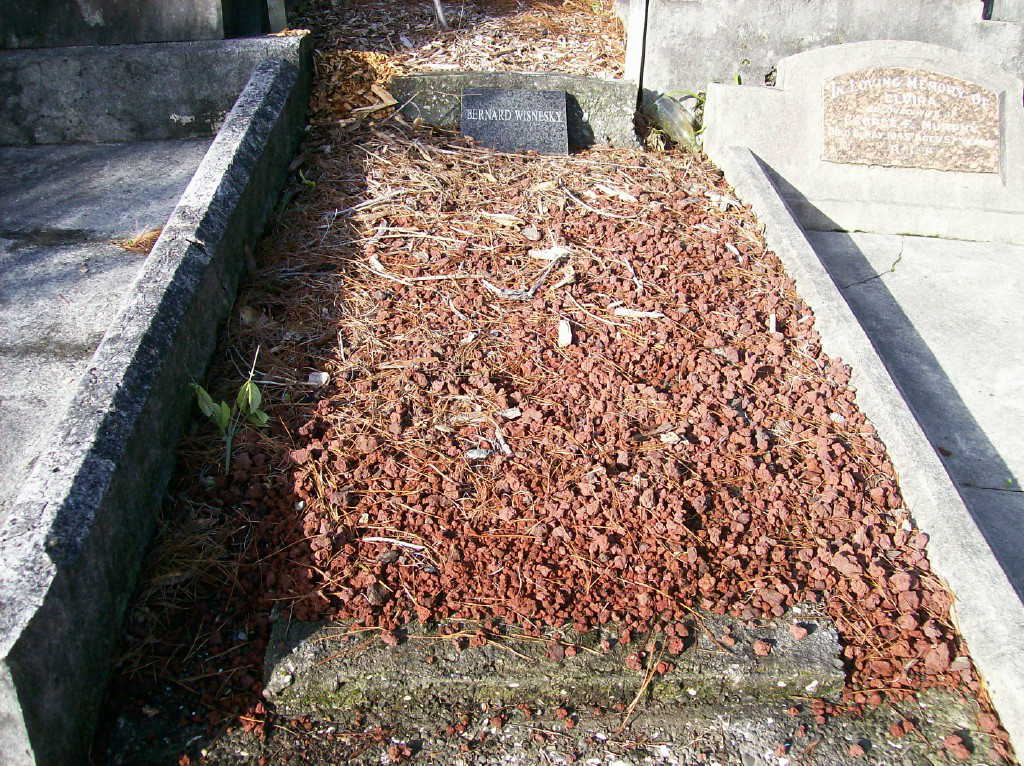