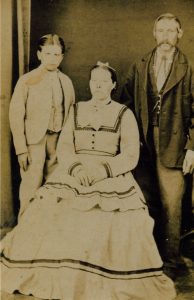 Listed aboard were: Johann C. Halba age 39, Johanna 30 and Joseph 9. The family were sent south to Scroggs Creek on contract work with Brogden and Sons to lay the southern railway through the Taieri. By mid-March, 1873, they were living in Cull Street, Waihola where John purchased their property later the next year. Here he built the family a small but abiding sod brick hut (still standing). It had a mud floor, no windows, one door and measured four by two point five metres in size and was about three metres high at the peak. Bridget brought out with her from Poland a brass pestle and mortar, which has been handed down through the family. She was regarded as having a very frugal streak to her nature but leading the pioneer lady’s usual hard life. In New Zealand their son was known as Joseph Valentin Halba and in 1875, at the age of twelve, commenced work with the New Zealand Railways and was placed with his father learning plate-laying.

Peter Brzoskowski, brother-in-law from Liebschau (Lubiszewo Tczewskie), writes to John Carl Halba of Waihoa replying that they had received his letter and the twenty pounds they needed to help them get to New Zealand.  Unfortunately the ships were no longer going to New Zealand but diverted to Queensland in Australia instead.  The journey that used to be 11 Thalers per person had just inflated to 111 Thalers per person.  At the time, 20 pounds was equivalent to 133 Thaler and ten silver groszy.

Dear Uncle and Auntie I beg you for your quick answer. Dirschau (Tczew) 20th of June, 1876.

Dearest Brother-in-Law, We received your dear letter together with the money and we thank you for it several times. May Dear God give you a lot of luck and blessings in the foreign country and keep your children in good health,

Dear Brother-in-Law, with the twenty-pound sterling I went to the English bank in Danzig (Gdańsk) and I had to leave the cheque there for which I was given a receipt. We had to wait for the money for six weeks but we did not pay anything for the exchange transaction. Local agents wanted to charge us twenty gulden for arranging the exchange. We received your letter on the 10th of May. The cheque for 20 pounds was first forwarded to London where it was verified. However, the delay did not matter, as we received for it the full equivalent amount of 133 thaler and ten silver groszy. From the above amount I kept for myself 50 thaler and gave the remaining 83 thaler and ten silver groszy to Dusienski.

Dear Brother-in-Law, quite a lot has changed with our plans to emigrate to New Zealand. Ships with emigrants are not departing to New Zealand any more, they are now sailing to Queensland in Australia, but we do not wish to go there. We wrote to the agent and he replied that he can arrange the passage to New Zealand but this will cost us 111 thaler for each person and we do not have so much money to pay. Should we wish to travel to New Zealand at the old price of eleven thaler per person then the English Government will post us to work in the forest and we will be unable to live with you in the same place. Should we be able to pay the full costs of the passage, only then we will be able to join you. Johan Behrend wrote to his family and they could travel to him. Those people who left in October and November all wrote that they work in the forest and that they are not together with their relatives. Both brothers Drozdowski from Liebschau (Lubsizewo Tczewskie) departed in November for New Zealand and now work also in the forest. The wife of the younger Drozdowski died after six weeks in New Zealand. This news made us very sad. Growski from Dirschau (Tczew) also departed to New Zealand. I have given him your address as he wanted to be with you, has he arrived?

Dear Brother-in-Law, we are very sad that at present we are unable to travel to New Zealand, especially as I have sold all my belongings. What shall I do now, when no more immigrant ships sail with the low passage fare Dusienski has not sold his belongings. I had to leave my room, because it was discovered that I had plans to emigrate to New Zealand. Now I have to share a room with two other persons.

Dear Brother-in-Law, we do not wish that you work yourself to death and be left without any money. This will happen should you post money to us all the time. However, should you be able in a year or two to pay for us fully paid passage tickets, then we will be sure that we will be able to join you as we wish to do.

This letter was translated by Mr. George Jaworowski, with the following comments; Written in German possibly as given sentence by sentence by a Pole. The phraseology is very Polish and the writer probably had a limited knowledge of German. Letter is courtesy of Alan Halba.

“Two men who had met with accidents were received into the Hospital yesterday, and treated by Dr Garland. One was Joseph Walker, of Kurow, who was kicked by a horse on the leg, and received a severe wound. The other was a man named Halba, who had three of his toes crushed by a railway track passing over them while at work on the Livingstone railway. It is not expected that the toes will require to be amputated.” North Otago Times, 12 March 1886, p 2

After the railway work on the Taieri was completed, John took a horse and sledge into the hills behind Waihola and cut manuka to sell or barter with. He was also employed as a labourer and tried his hand at farming. According to the 1882’ Return of Freeholders, John owned 21 acres to the value of £150 at Waihola.

John, a farmer at Waihola, was naturalised as a New Zealand citizen on 10 October 1893 and died at his residence on 19 May 1914 aged 80. Bridget, who preferred to live almost in isolation, died on 7 December 1920 aged 80 at her son’s residence at Circle Hill. She is buried with her husband at the Waihola Cemetery. 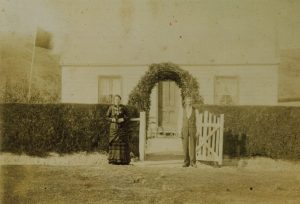 Bridget and John Halba in front of their cottage at Waihola with the Prussian Infantry Regiment flag proudly displayed on their right, courtesy of Alan Halba. Timaru

Józef Walenty Halba (Anis), was born at Lisewo Malborskie on 19 August 1863.  After learning to be a platelayer, he worked in both Islands for the New Zealand Railway. Joseph married on 30 December 1891 at  St. Mary’s church in Milton to Teresa Augusta Barra (b. 1863 at Gniszewo–d. 1939), the daughter of Peter Albrecht Barra and Eleonora Wilhelmina Maas. The family were: John (b. 1893–d. 1893), Rosalie Theresa (b. 1895–d. 1933), John Peter (b. 1901–d. 1942), Theresa Josephine (b. 1902–d. 1977), Joseph Francis (b. 1906–d. 1966) and Leonora Bridget (b. 1907–d. 1949).  For a time, they lived at Waihola, Taihape, Lawrence, Circle Hill and finally settled down in Milton. After farming at Circle Hill, Joseph worked for the Milburn Lime and Cement Company until health forced him to retire.  Alan Halba recalls his grandfather, Joe Valentine, always kept a tin matchbox full of gold nuggets on his person.  It was known he would clamber into his boat and row across the Waihola lake in the Berwick direction.  Many followed him, but not a soul ever spotted him.  He would stay away a couple of nights then reappear at home – matchbox full once more.  Often the chasers would return home just to find Joe at home watching them, often wet and hungry.  They lost their sense of humour very quickly and in time many gave up following him. Joseph died on 11 February 1938 at Milton and is buried with his wife at the Fairfax Cemetery.

“The hand of death fell suddenly on Mr Joseph Valentine Halba at his residence, Spenser Street, Milton, on Friday evening. He had just finished his evening meal and was going outside when he collapsed at the back door from a severe heart attack. He was carried inside, and attempts were made to revive him. He rallied slightly, but passed away shortly before the arrival of medical assistance. No inquest is necessary, a certificate being forthcoming.” Bruce Herald, 4 Februrary 1938

“Mr Joseph Valentine Halba, who passed away with tragic suddenness at his residence, Spenser Street, last Friday evening, was born in Liepshau, Germany, in August 1863, so that he was in his 75th year at the time of his demise. At the age of 11 years, he emigrated with his parents to New Zealand, in the sailing vessel Palmerston, landing at Port Chalmers and settling at Waihola. At 12 years he was learning plate laying with his father, and assisted in laying the railway between Christchurch and Bluff for the New Zealand Government. Later he was foreman for about three years of a section on the North Island Main Trunk railway, and he then assisted in laying the Catlins line. In 1893 he married Teresa Barra, of North Branch, the wedding being solemnised at Milton. Shortly before he was due to retire on superannuation he purchased a farming property in Circle Hill district, relinquishing this after about seven years to reside in Milton. He worked at the Milburn Lime and Cement Company’s works at Milburn until about two years ago, when an operation forced him to retire from active labours. He never took any part in outside affairs, being content with his home life. His widow and four members of the family of five are left to mourn the loss of a devoted father. The members of the family are John and Joseph, Misses Teresa and Nora, all resident in Milton. Another daughter, Rosalie (Mrs J. Wilson), died about five years ago.” Bruce Herald, 17 February 1938

Theresa died at Balclutha Hospital on 4 December 1939 aged 76 and is buried at the Fairfax Cemetery near Milton. 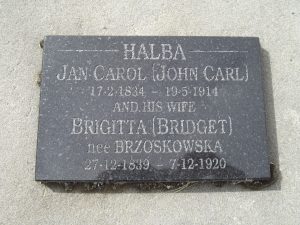 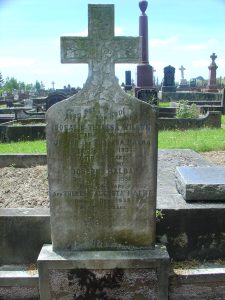