Trąbski (Trąpski), Eduard Wilhelm Carl Frederick arrived aboard the “City of Dunedin” from London, 4 Oct 1869. He worked in Dunedin as a carpenter and died unmarried 15 Jun 1914 aged 74. He is buried in the Andersons Bay Cemetery, Dunedin.

Trąpski, Frederick Ferdinand (1839-1874) Tusewark?, Gdańsk, the son of a tailor, m. (10 Dec 1864) St. Joseph’s, Dunedin, Alice (Alicia) McKenna (1834-1883), the daughter of Charles McKenna. Family—Greytown; Charles Henry (1866-1920), Frederick Ferdinand (1868-1946), Alice Alicia (1870-1929), & John (1872-1944). Frederick worked as a farmer in the district and owned a small house and barn beside the railway. In 1874 Frederick applied for 200 acres of section 1, block 13 at Waipahi. Before the move Frederick was involved in a coaching accident in January of 1874 that interred him to the Dunedin Asylum. “Steadman’s four-horse Waihola coach, driven by T. Aitken, met with an accident on Monday morning, When passing Lookout Point, the pole broke short, and the coach upset, the horses bolting with the front carriage, and dragging the driver for a short distance with them. He escaped, however, without injury, but some of the passengers of whom there were a good number received nasty bruises from the metal. William Mulligan had one of his wrists sprained; and Fred Trapske, a German, was conveyed to the hospital, being severely bruised, but having no bones broken. The other passengers were forwarded to Dunedin by a Caversham bus. 10 Jan 1874 OW. Some of the foreign residents in the Taieri are rather unfortunate. A Frenchman had to be sent to the lunatic asylum a few weeks ago, and last week a German named f. Tropski, had to be sent to the same place. It will be remembered he met with an accident through the upsetting of Mr Steadman’s coach, about six months ago, and although he had been in the hospital for several weeks, he never properly recovered the shock, and his ill-health and consequent inability to earn anything to support his family caused great depression in his spirits, which resulted in his insanity. According to the doctor’s opinion, his case is hopeless. We learn that a few of the gentlemen of the East Taieri are endeavouring to raise a subscription to aid his wife and four children, the eldest of whom is not eight years old. As he has been well-known in the district for over twelve years, we have not doubt the gentlemen will be successful”. 2 Oct 1874 BH. Frederick died 13 Oct 1874 aged 35 and is buried in the Southern Cemetery, Dunedin. Alicia & children moved to Waipahi in the hope of making a better future for the family. “One of the selectors in the deferred payment block at Waipahi, named Frederick Trapski, died soon after he took up his land, leaving a widow and four children very badly provided for, but the widow, with unusual pluck, dertermined to keep the 200 acred section, and try to put on the improvements required by law. She had some cows, so made butter and sold it, thus obtaining money to procure provisions and fence in the land, but when the three years were up, she had no land ploughed. The Waste Land Board dedcided that the ploughing must be done, and granted her time to do it. She informed some of the neighbours of the circumstance, and a subscription was at once started, and sufficient money collected to plough the required twenty acres, and we are glad to state that the poor widow has now received the lease she has so well earned”. 27 Jul 1877 CL. She is reputed to have repeatedly walked the three or four miles to Waipahi to put the butter on the train for sale in Gore. It was often said that the wandering animals were a bit of a problem because of the lack of fencing in the area. Aged only 49 years of age she succombed to cancer and died on 3 Sep 1883. She is buried in the Gore Cemetery. Edmund Hayes and Daniel Clarke were executors and guardians of the children aged 17, 14, 13 & 11. The Cooper family in the same district brought up John, the youngest son. Alice, the only daughter at 12, took responsibility for looking after her older brothers. 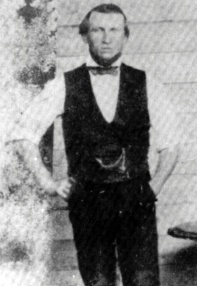