click on name or picture to go to Byszewski Family Tree

In 1882, newpapers reported a tragic fire in their two-storey home in Smith Street. The fire claimed the lives of the three eldest children and that of their twelve-year-old cousin, Thomas Kreft of Pine Hill, who had stayed overnight because of bad weather. The children are buried at the Southern Cemetery in Dunedin. 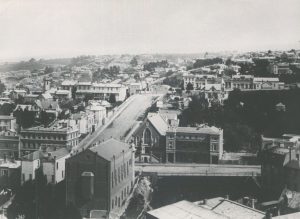 “In consequence of the lateness of the hour yesterday morning at which the fire in Smith Street occurred we were unable to give more than a brief outline of the disaster, and this we were able to insert only in our city edition. The following additional particulars therefore will read with interest by all. The building in which the fire, so fatal in the results, originated, was occupied by Julius Bischefski (a native of Poland), his wife, four of children, and a nephew named Thomas Crefts and was situated in the center of a row of old wooden buildings belonging to Mr F. B. Cargill and held on tenancy by Mr Robert Greenslade. Bischefski’s house was a four roomed two-storey one and the front and back rooms on the ground floor were used as kitchen and sitting room respectively. The rooms upstairs were used as bedrooms, the front one occupied by Mr and Mrs Bischefski, and the back by the children – the two little girls occupying one bed and the eldest son and nephew the other. Mr Bischefski’s statement is as follows- He and his wife retired to bed about 11 o’clock on the previous night. They were awakened sometime later by the eldest son calling out, “Oh, Mama! smoke, smoke! There was no smoke in Bischefski’s bedroom at the time, but he immediately jumped out of bed and crossed the small passage between his own room and that in which the children were sleeping. On opening the door of the latter, he was met by a strong tongue of flame, unaccompanied, so far as he could perceive, by smoke. He tried to reach the children, but his nightdress caught fire, and he was forced to go back. Rushing to his own room he wrapped himself in a blanket, entirely covering his head and face, and returned to force his way through the flames in the endeavour to make the rescue. The blanket was burned about him; yet twice he again and again renewed the attempt. At length the room in which his wife was at the time caught fire through the open doorway, and the flames were fast making headway. Seeing nothing could be done for the children, his attention was turned to the safety of his wife and the youngest child (a boy, two and a half years of age). Mrs Bischefski had at the moment made a desperate effort to enter the back bedroom herself through the midst of the fire; but her husband dragged her back with the flames upon them; and dashing his fist through the window overlooking the street, seized the little boy under his left arm and swung himself out over the ledge, hanging on to the inner side of the window framing by his right hand. He then extended his left arm, holding the child, and thus dropped it gently on the pavement. Drawing himself up again, he prepared in the same way to break the fall of his wife in her descent from a height of 10 ft, but the flames were so close that, unable to endure the heat any longer, she threw herself unexpectedly into his arms before he was quite prepared to receive her, and the sudden impetus, forced him to relax his hold. Both dropped, and the poor woman fell upon her child, which is considerably injured in consequence. Nor did she herself escape unhurt, for in the fall she came heavily on her face on the asphalt pavement, and beside sustaining severe contusions on the forehead, she was much cut about the mouth, and had a number of her teeth so crushed in by the force of the blow that it is probable she will lose most of them. On realizing the position of things, she became quite frantic in her cries for her children, and, only that her husband kept her back, would in her frenzy have dashed into the burning building. Mrs Greenslade, wife of Robert Greenslade, who occupied the house on the south side of Bischefski’s, states that her eldest son heard Bischefski shouting “fire!” and perceiving smoke was entering the room he immediately aroused his father and mother.

On looking out Mrs Greenslade heard Bischefski shouting and saw him wildly waving his arms from the window. She then dragged her own children out of bed, and by the time she had snatched up a few articles of clothing, and all the family had got safely outside, the south wall of the house was a sheet of fire. She further states that the fire bell did not ring for some minutes after her son first gave the alarm. The bodies of the four children who perished in the flames were recovered by 4-3 am by Firemen Robb and Lind, and were then lying on the floor of the kitchen below the bedroom. They were found huddled together upon the mattresses of the two beds on which they had been sleeping, and which seemed to have fallen right through from the upper floor. As the children did not seem to have arisen from bed, it is probable that the horrible death to which they were victims was alleviated by suffocation, before the flames came upon them. The bodies were removed from the debris by Detective Walker, ‘and placed on sheets of iron and covered over until an express arrived, shortly after 5 o’clock, when they were conveyed to the morgue.’ They were so charred as to be unrecognisable. The correct names of the children were: – Francis Bischefski, aged 8 years. Minnie Bischefski, aged 6 years. Martha Bischefski, aged 4 years. Thomas Crefts, aged 12 years. The shrieks of the poor woman as she witnessed the burning building were heartrending in the extreme, but fully a quarter of an hour had elapsed from the breaking out of the fire before the cause of her distress was known. Even though it had been at the time when the Bischefski’s themselves were aroused, there would not have been any chance of rendering assistance in the matter of saving the children, for the whole back part of the house was enveloped in flames. How the fire originated is a mystery, but as we have ascertained that a few live ashes had been left in the kitchen grate on the previous night, a spark from this was the probable cause, and the dry timber would burn very rapidly. The fire had almost instantly spread to the six-roomed house on the south side, occupied by Mr Greenslade, and to the two-roomed houses on the north side, occupied by a married man named Brydstone. The houses were not separated by any protection walls, although built closely together and had there been any wind at the time, it must have been difficult to stay the progress of the fire. As it was, the houses on each side of Bischefski’s were entirely gutted by the time the Fire Brigade had arrived. The insurances on the buildings destroyed amount to £60 in the Norwich union Office, in the policies of £75 on Greenslade’s house, £50 on Bischefski’s and £35 on the Brydstone’s. None of the occupants had any insurance on their furniture or household goods. The brigade were late putting in their appearance, on account of the horses refusing to pull the gear up the incline of Stuart Street. As soon as possible after the arrival of the police on the scene they dispatched a messenger for a conveyance and had Mrs Bischefski conveyed to the Hospital, where, besides the burns and bruises sustained in her escape from the building, she was found to have been considerably lacerated about the head and arms in getting through the window. She was yesterday, visited by a number of friends, who found her less irritable, and improving as well as could be expected under the circumstances. Bischefski has been very much torn and cut about the legs and arms, and has also sustained several burns. The child had one of its legs wounded severely. The father and child are at present residing in Cumberland Street with Mrs Gdanitz, mother of Mrs Bischefski. The lad Crefts was a son of Mr Crefts, dairyman at Pine Hill, and attending the Christian Brother’s school along with Mr Bischefski’s two eldest children. He usually went home to Pine Hill at night, but as the weather looked threatening on Monday night, he resolved to stay with his uncle. Bischefski has been in the employ of Messrs Speight and Co. for the last four years, but was absent from work for about a week past owing to rheumatism.” Otago Daily Times, 22 February 1882

According to the 1882’ Return of Freeholders, Julius owned 241 acres at Allanton valued at £240. On 19 October 1885 Julius had purchased sections 44 and 45 of the Block: 2nd Ext. in the township of Selwyn. Julius while working as a labourer in Dunedin and was naturalised as a New Zealand citizen on 4 November 1890.  In 1893, Mary entered her signature onto sheet 53 in the region of Dunedin for the Women’s Suffrage Petition Roll.

“THE GORE BREWERY DESTROYED. One of the most destructive fires happening in Gore for some time occurred shortly after 2 a.m. on Monday. Mr H. Richardson, who lives in the vicinity, was aroused by the sound of falling timber, etc., and on looking from his window discovered the front portion of the brewery in flames. An alarm was quickly raised, and owing to the strong hold the fire had upon the building, the inmates— Mr Bischiskie and family experienced considerable difficulty in escaping unharmed. A few minutes later the Fire Brigade and a large body of citizens were on the scene, but the progress of the flames had been so rapid that only a piano, and a few trifling articles of furniture could be saved. The strong sou-westerly wind prevailing at the time aided the course of the fire to such an extent that in a little over half an hour from the time when Mr Richardson gave the alarm, the entire block, including brewery, stables, bottling stores and residence, was reduced to a heap of embers. The fire engine was got out at an early stage, but owing to the hold the fire had obtained on the building, and the fact that other premises in the neighborhood were immune from danger, it was not deemed expedient to incur the expense of pumping. The origin of the outbreak is a mystery, and apparently the fire started started in the front part of the block where the stables were situated. The lessee of the brewery, Mr H. G. Horne, will lose considerably, owing to the destruction of material and plant and stoppage of business. The building and machinery were owned by Mr R. Whittingham, and were insured for £260 altogether. Mr Home’s insurances were: Stock and stock-in-trade, £200 in the New Zealand office and £100 in the United. Mrs Bischiskie’s furniture, which, with the exception of the piano, was all destroyed, was insured for £100 (£35 being on the piano) in the New Zealand office. Her loss will be considerable, also.” Mataura Ensign, 8 June 1897, p 2 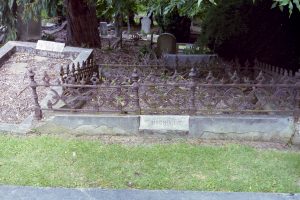 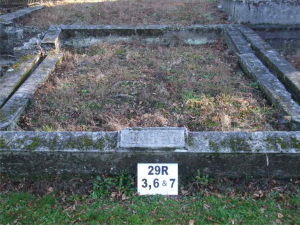