click on name or picture to go to Szule Family Tree at ancestry.com “IN RE JOHN SCHULTZ, LABOURER, GORDON. In this estate the assets appeared to be a house on a leasehold section in Gordon (L4O) and a horse and saddle (30s) — total. L4l 10s; and the liabilities, L 145 12s 5d.— Mr Fletcher appeared for the creditors, and in his examination it was elicited that the bankrupt had a section on Merino Downs, on which he spent his all, to wit, a sum he received on a horse race, and that he had afterwards built in Gordon. He had a family. He got unquestioned credit from the storekeepers in Gore and Gordon, and then they all came down upon him at once and he had to file. — The meeting waa adjourned to admit of the debtor’s making some proposal; mean time the property to be sold. Wednesday, 13th July.” Southland Times, 14 July 1887, p 2

In 1893 John fell seriously ill with tuberculosis and then contracted pneumonia and could no longer work to support his family. He died on the 2nd of November 1893 at the age of 47. Mary was 34 years old and seven months pregnant at the time, and was left a widow with seven young children to raise on her own.

“A concert, under the auspices of the local Druids, was given in the Town Hall, Gore, on Wednesday evening, for the benefit of the widow and family of the late John Schultz. The object for which the concert was given, and the fact that several of the items were kindly undertaken almost at a moment’s notice, in order to stop gaps, renders it inadvisable to deal critically with the individual performers. There were several really enjoyable items, notably Mrs. Brett’s rendering of Auld Robin Gray, which was sung as Mrs. Brett only appears to know how to sing it, and was deservedly encored; Messrs Matheson and Wright’s duet “All’s Well,” and Mr. Bowler’s Death of Nelson. A couple of part songs were also well sung, but the first was a funereal item and very unsuited to the occasion. None of the remaining numbers call for special mention; some were fair; others decidedly wanting; and taken a whole the performers were a bit off colour, as sporting men say. Considering the wet night, the attendance was very good, but there was a certain element present whose room would have been preferable to their company. The dance that followed was well attended, and it is satisfactory to know that the result of the entertainment will be a substantial amount in aid of a worthy object.” Mataura Ensign, 20 April 1894

The total amount collected was totalled at £18. John was buried at the Gore Cemetery.

Frank, a farmer and brother Jack, a nurseryman, helped support the family, being no social welfare in those days. Mary was naturalised as a New Zealand Citizen on the 24th of August 1926 and died on the 22nd of January 1932 at Gore. Mary is buried with her husband at the Gore Cemetery. 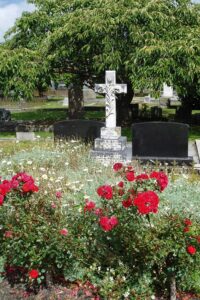