Church of the Sacred Heart – Six generations of the Polish faithful

When the first Bishop, Dr. Moran arrived in Dunedin in 1871, to establish a diocese in Otago, he arrived in time to open the first Catholic church on the Taieri Plain.

“A new Roman Catholic Chapel is in course of erection at East Taieri and the dimensions to be 40 x 20 feet.  The contractor is a West Taieri man.”  Bruce Herald, 31 August 1870

This was the only Catholic church between Dunedin and Milton and the site chosen was near the Grange, predicting a flourishing settlement at Riccarton as various stores and services were beginning to appear there.

“The Right Rev. Dr Moran, Bishop of Dunedin, will on next Sunday consecrate the newly erected Catholic church in East Taieri (or Grange) at 11 o’clock on Mr Macgregor’s Farm, East Taieri.  A four-horse coach will leave the Gridiron Hotel, tomorrow morning at 9 o’clock sharp, for the purpose of conveying parties desirous of witnessing the above interesting ceremony, returning immediately after.  Fares moderate. J. Steadman.” Otago Daily Times, 25 Feb 1871

The Chapel was opened on the 26th of February 1871 and was consecrated ‘Church of the Immaculate Conception‘.

“Consecration of Catholic Chapel, at The Taieri. —The Right Reverend Dr Moran, Bishop of Dunedin, yesterday consecrated the Catholic Church at East Taieri, in the presence of the congregation and a large number of visitors from Dunedin, and the country districts. Mass was celebrated by the Rev. Father Maloney, P.P. His Lordship preached a powerful and eloquent sermon on the duties and obligations of religion, premising his remarks with a reference to the day’s proceedings. He congratulated the congregation upon the fact that the church was completely out of debt—a circumstance as gratifying to the initiators of the work as to himself. To inaugurate a work like the one he had inaugurated that day so soon after his arrival in the Colony, was a circumstance peculiarly gratifying to him, because it spoke of the progress of religion and of sincerity, faith, and piety of the people. It gave him consolation, therefore, because it gave him hope for the future. But that was not the only circumstance which rendered it peculiar to himself; there was connected with the consecration a circumstance which brought his memory back many years. He had that day dedicated the little church in which he was speaking to the Immaculate Mary, and that reminded him that the first church in his former diocese was similarly dedicated. He expressed a wish that the congregation might long be able to meet and work together in the good cause. A portion of St. Joseph’s choir, strengthened by Mr Leslie, who sang the solos, rendered Natividad’s mass very nicely, Mrs Conway presiding at the harmonium. The day’s collection amounted to close upon L2O. The church, which is capable of holding nearly 200 people, was built at a cost of L 350, and was finished early in January. It is situated on a portion of the Grange property, the land on which it is built being the gift of Mr N. B. Macgregor, who was also a subscriber to the extent of nearly one-third its cost, and to whose efforts, we believe its erection is mainly due.” The Evening Star, 27 February 1871

The chapel was to service the whole of the Taieri but infrequent as the religious ceremonies were infrequent due to the shortage of priests, thus the building stood as a silent reminder of God’s presence.  Records show that Bishop Moran officiated at the chapel, the weddings of Jozef Pedowski to Maryanna Walinska on 29 January 1875 and Jan Switalla to Marta Piernicka on 10 November 1881. 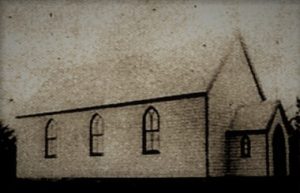 Church of the Sacred Heart, courtesy of the New Zealand Tablet

Early Polish marriages held at the Chapel at East Taieri

Not long after the opening of the chapel at Riccarton, a woollen factory, for the manufacture of blankets, tweeds, and other fabrics was established on what was ‘Mosgiel farm’,  It then appeared people preferred to settle around the mill rejecting the small settlement at Riccarton now East Taieri, which was to include Mosgiel Junction. Bishop Moran could see the small chapel was going to be inadequate for the growing population at Mosgiel and so opened ‘St. Mary’s‘ in Gordon Road, Mosgiel on the 19th of June 1887. The Poles at Allanton were in desperate need of a church of their own and it made sense to relocate the church at Riccarton.  In his address to the congregation, he said;

“This Church no longer suffices to your needs, and on this account we are all here assembled to lay the foundation stone of a new Church in Mosgiel, a place with more population than East Taieri and more convenient for the congregation. The old church and its associations will not, however be lost to memory, as it is to be taken down and re-erected at Greytown for the accommodation of the Polish Catholics of that place, a people not inferior to yourself in depth and sincerity of faith, in practice of their religion and their Christian generosity.  To you and to them great credit is due, and great thanks are owing for the determination and luck and generosity with which you have all entered on this twofold undertaking.  That you will carry it to a successful conclusion no doubt whatever can be entertained”

The Allanton community held a concert at the Athenaeum Hall to raise the funds for its relocation.  The site for the church was purchased from John Mitchell, a setter. It is believed Father James O’Neill supervised the dismantlement and re-erection of the church on the 24th of June 1887.

The church was blessed and opened on 19 October 1888 by Bishop Moran and was consecrated ‘Church of the Sacred Heart‘. During his blessing he addressed the following.

“It is now only a few months more than 16 years since we first met not far from where we stand, and on an interesting occasion, an occasion to be remembered by me as well as by you. On that occasion it was my pleasing duty to open the new Church of the Immaculate Conception you had lately erected at East Taieri, the first Church blessed and opened by me in this Diocese.” 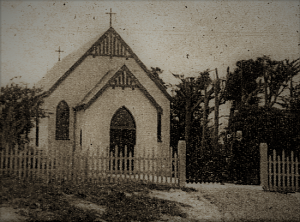 The church recently erected at Greytown was opened last Sunday forenoon by the Most Rev. Dr Moran. High mass was celebrated by the Bishop, Father O’Neil being deacon; and Father Lynch, sub deacon. There was a large attendance, the building being found insufficient to accommodate all who had put in an appearance. The greater part of the congregation is composed of Polish Catholics, and during the sermon the Bishop appropriately referred to the struggles which Poland had been made in the past in the cause of their religion.  In his introductory remarks, His Lordship said that he had come to dedicate the church, with all the ceremony they could command under the circumstances. It has been dedicated to Almighty God as the Church of the Sacred Heart of Jesus. He congratulated them on the erection of the building, which was alike creditable to them and to their pastor. It supplied a long-felt want, and he trusted it would be the means of great spiritual advancement. The majority of people who would worship in this church belonged to the Polish nation, who held a conspicuous place in history as a nation, which existed no longer – that was, it was no longer known in its political capacity. They were a great Catholic people: full of faith; full of piety; practicing their holy religion, and making for it the very greatest sacrifices that people could make. He then dwelt upon the way in which the Polish people, throughout all their persecution had adhered to the Roman Catholic faith; and said that he had no doubt that a great and good day was in store for Poland; he hoped that it would be so and that it would become once more a great Roman Catholic nation. Europe was indebted to the Polish nation for stemming the Mohammedan invasion which had threatened to over-run it. Something was in store for a people who had been so faithful and so brave and who had made so many sacrifices for God and their church. He trusted that they, representatives of that illustrious nation, would never prove themselves to be unworthy of the history of the race to which they belonged. He trusted that the Poles here would give good examples to their fellow Catholics. He hoped that the children would be gathered together in the church every Sunday, and that some of the devoted men of the congregation would come and teach them the catechism – the great truths of their holy religion. He prayed that Almighty God would bless this church and bless the congregation which would worship it. The musical portion of the ceremony was provided by the Mosgiel Roman Catholic Choir, Madam Ivens presiding at the harmonium. Visitors were present from Tokomairiro, Kuri Bush, Mosgiel and other districts. The collection amounted to the handsome sum of £75.” The Taieri Advocate, 17 October 1888. 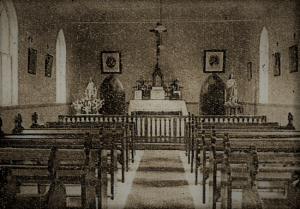 The church had seen many baptisms, weddings and funerals over the years but there is one that comes to mention in the way of a double wedding of John Smolenski to Annie Black and Antoni Velenski to Martha Smolenski on 19 July 1899.  In this incidence both grooms unfortunately had succumbed to an early death with John passing away aged 31 in 1905 and Antoni aged 44 in 1915.  Superstitiously it led to some of the family members believing that double weddings had become a bad omen.  While the setters were aging and the next generation moved further afield, the congregation slowly dwindled and there was subsequent deterioration of the church building.  In 1948, Father M. W. Woods was successful in having the building completely renovated, and the church returned to full use.  In February 1971, special celebrations to mark the Centenary of the Church took place.  The church had its final mass celebrated there in September of 2005 and was soon deconsecrated thereafter.  The church was sold and unfortunately demolished not before some interest was shown to rescue its plight.  It was the oldest Catholic Church between Dunedin and Milton and the first Polish Church in the South Island. 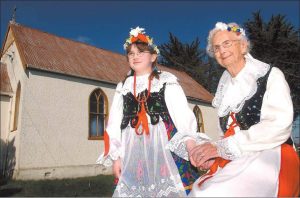 A time to reflect – Monica Holmes and Mona Todd outside the historical church at Allanton, after attending the thanksgiving mass for its closure, courtesy of Otago Daily Times, 12 September 2005.