“A considerable accession to the German population of the Province was made on Thursday by the arrival of the ship Reichstag, from Hamburg, with 350 immigrants on board. The vessel has made a comparatively rapid passage to the New Zealand coast, having been only out 85 days, during eleven of which she has been working along the land to her port of destination. There occurred only one death during the voyage, and there was one birth.” New Zealand Mail, 8 August 1874, p 16

“Yesterday afternoon arrangements were made for the removal of the newly-arrived foreign immigrants by the Reichstag, and Messrs. W. and G. Turnbull and Co.’s s.s. Napier was chartered to convey most of them to Somes Island. The landing was accomplished in two trips, in which 250 of the immigrants were transferred to the island, where they will remain until arrangements for their accommodation at the depot can be made This can scarcely be accomplished until the majority of the immigrants lately arrived by the Conflict are removed.” New Zealand Times, 8 August 1874, p 2

“We are likely before long to have considerable additions to the population of the Province. The ‘Euterpe,’ the ‘ Reichstag,’ the ‘Conflict,’ and the ‘Strathnaven,’ which have all been announced as having sailed for Wellington, will bring in all 1605 souls. The sailing of the ‘Cartouche’ and ‘Douglas,’ with 800 souls, has also been telegraphed. Since the foregoing was written, the ‘Conflict’ from London has arrived.

The General Government free immigration policy has already resulted in a-serious difficulty arising between them and the Brogden firm. The Brogdens, at the instigation of the Government, sent out some 1299 working men to the Colony to do the work of the firm. Of these men only 76 remain in their employ, the remainder having been attracted away by the allurements of higher wages and other causes. The Brogdens took promissory notes from these people for the amount of their passage money, but they now allege that since the adoption by the Government of the free immigration system it will be impossible further to enforce payment of these notes. Under these circumstances the Brogdens hold the Government liable to repay them the whole of their outlay —passage money and everything —in connection with the introduction of these labourers, and have made a claim, through the Agent-General, for £35,000. Their case is by no means a bad one, and it seems to be thought here that sooner or later their claim, to a certain extent at least, will require to be satisfied. “ Wanganui Chronicle, 8 August 1874, p 2

“The Germans by the Reichstag do not all hail from Vaterland. There are 100 Danes among: them. They were quite a happy family on the voyage, and their isolation on Soames Island is depriving them of chances of employment which they might otherwise have. We understand a number of them are anxious to proceed to Dunedin, where they already have friends and relations.—Tribune.” Wanganui Herald, 17 August 1874, p 2

“Enclosure in No. 26. Immigration Commissioners’ Report on Ship “Reichstag.” Sic,— Wellington, 17th August, 1874. We have the honor to report the arrival of the ship ” Reichstag,” from Hamburg, on the 6th instant, with 28O adult immigrants. Only one death occurred during the voyage, viz. a child from dropsy. On inspecting the vessel, we found the single women located under the poop. They had plenty of room, light, and ventilation in their compartment, and the hospital and water-closet were exceedingly good. The married people had the use of the after and main hatches. The entrances were built up like deck houses, and were a very great improvement on the flimsy booby hatches in the British ships which bring immigrants to this port. The berthing arrangements, however, were not so good as in the British ships, but the compartment was clean and sweet. The single men were comfortably located in the fore part of the ship. In fact, all the compartments were very comfortable, and this was to be attributed in a great measure to the unusual height of the ‘tween-decks in a vessel of the tonnage of the ” Reichstag.” The immigrants are a very fine body of people, and contrast most favourably with recent shipments of our own countrymen. They all expressed themselves in the highest terms of praise of the surgeon-superintendent and captain, not only to us, but in an address which was published in the local papers. In conclusion, we have to recommend the payment of all gratuities, and have to congratulate Captain Hanschild and Dr. Waterhart upon bringing the “Reichstag” into port in such admirable order, and especially on the fact of their having a lower death rate, so far as we are aware, than any vessel which has as yet arrived in the colony. We have, &c, Alexander Johnston, M.D. H. J. H. Eliott. His Honor the Superintendent, Wellington. John Holliday.” Appendix Of The House Of Representatives, 1875, D-3.

“A certain morning production persists in exposing its ignorance by calling the. immigrants per Reichstag, Scandinavians. There are a few of them among them, but the bulk of them consists of German. There is as wide a difference: between the two nations as there is between French and English. A more offensive term could not be applied to a German than that of Scandinavian.” Wanganui Herald, 24 August 1874, p 2

“The last of the Reichstag’s passengers. — 68 souls — were disposed of today, being forwarded to Taranaki by the Taranaki, under arrangement with the provincial authorities. The rest of this vessel’s immigrants have been distributed as follows; — 35 were nominated by friends in Otago, and forwarded to that province; 54 have found employment at Marton, 65 in the Wairarapa,.11 at the Pelorus, 23 in Picton, 5 in Wanganui, 2 in Foxton, and 78 in this city. This makes the total of 341.” Evening Post, 29 August 1874, p 2

“When the last number was taken at the Caversham Barracks, no less than 227 children were then located. They look healthy and strong, but their quarters have anything but an attractive appearance. The German families occupy the western compartment of the Barracks. Considerable improvements are being effected by draining, metalling, and filling in operations. About a dozen men are employed at the rate of 3s per day, with rations and lodging for themselves and families. Two Hungarian soldiers who were working on Saturday have not yet parted with their regimentals.” Otago Witness, 22 August 1874, p 15

“There have been a number of clearances from the Caversham Immigration Barracks during the past week, there being no less than twenty-two families, comprising 44 adults, and 40 children. Of these nine were German families, who were sent to Waihola. There yet remain in the Barracks 149 adults and 186 children. The next immigrant vessel expected to arrive is the Corona, which left London on the 23rd May.” Otago Witness, 29 August 1874

“WASTE LANDS BOARD.  SETTLEMENT OF GERMAN FAMILIES. A letter was read from Mr C. Hilgendorf, on behalf of several German families lately arrived per ships Reichstag and Sussex, applying for settlement of them in the Waihola township. He requested that the Board would grant to each family half an acre under the terms of the 29th clause of the 0tago Waste Lands Act, 1872. The Board had no power to grant the application.” Otago Daily Times, 27 August 1874, p 3 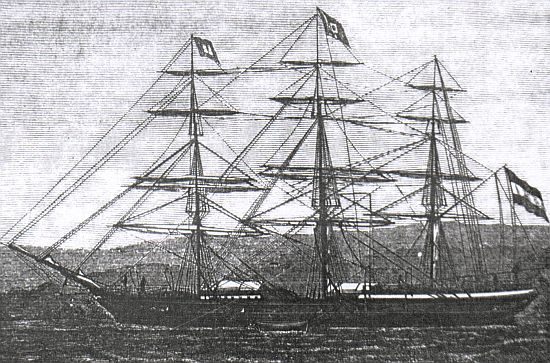 The ship “Reichstag,” courtesy of the History of the Polish Settlers in New Zealand 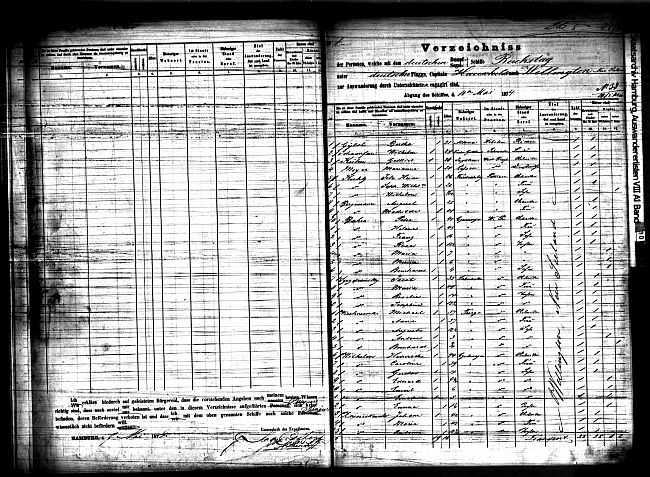