“ARRIVAL OF THE MARLBOROUGH. IN QUARANTINE. On the afternoon of January 7th the signals at the Heads announced the arrival of the Albion Company’s ship Marlborough, Captain Anderson, after a passage of 75 days from Greenock Shortly afterwards the tug Koputai steamed down and took her in tow, crossing the bar at 7 p.m. and bringing her up as far as the Quarantine-ground, where she anchored at 7 45. The Customs’ launch, having on board Dr Drysdale, medical officer to the Board of Health; Mr Monson, emigration officer; Captain M’Callam, health officer; and Captain Logan, marine superintendent to the Albion Shipping Company, proceeded down, and upon getting close to the vessel ascertained from Captain Anderson that there were some eight or 10 cases of measles on board. After receiving the bill of health from the surgeon of the ship, the officials ordered the yellow flag to be hoisted, and returned on shore, when we were kindly shown by the Health Officer the bill of health, from which it appears there are on board 355 souls, in addition to 43 of a crew. Once during the passage there had been 45 cases of measles, and only in the first cases were the patients isolated and their clothes and bedding destroyed, disinfectants being freely used. There have been six deaths, all children, the eldest, being 10 years; four from measles, one from suppurating sore throat, and one from acute bronchitis— the last death occurring on the 7th, when rounding Cape Saunders, the body being still on board the vessel. There have been three births. It has been decided that the steerage passengers shall be landed on the island this (Thursday) afternoon, while the saloon passengers will remain on board. The ship will be thoroughly cleaned and fumigated before being admitted to pratique. We are unable to publish a report of her passage out, but must congratulate Captain Anderson on making the best passage of the season.” Otago Witness, 10 January 1880, p 14 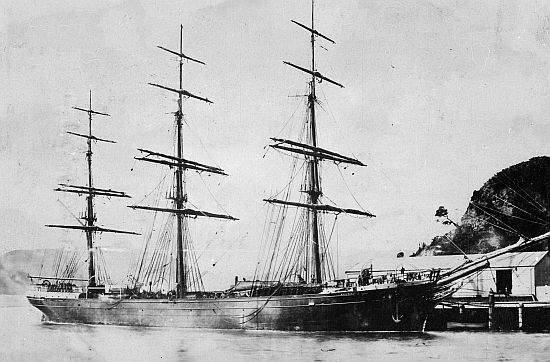 The ship “Marlborough” at Port Chalmers