“The Agent-General, under date 7th May, telegraphs that during April the following ships and emigrants were despatched for the colony: Lammershagen and Collingwood, with 709 emigrants, for Wellington and Taranaki; Star of China, with 241, for Lyttelton; and Fleming and with 776, for Otago.” New Zealand Times, 20 May 1875, p 2

“The following is the list of nominated immigrants who sailed by the Collingwood for Wellington, on the 13th April, with 134 souls, 111½ adults. The Collingwood has also immigrants for Nelson, Westland, and Tarananaki… The Lammershagen also sailed from Hamburg on the 1st April, with 420 souls, 331½ adults” Evening Post, 7 June 1875, p 2

“SHIPPING INTELLIGENCE. ARRIVAL OF THE GERMAN SHIP LAMMERSHAGEN. This flue iron Clyde-built ship arrived on July 11th, from Hamburg via Cuxhaven, after a very fair-weather passage of ninety-six days from Cuxhaven. We are pleased to state that she has arrived with a clean bill of health, little or no sickness having occurred on the voyage. One death, that of an adult, and five births took place on the passage. Owing to the vessel not having been admitted to pratique we were unable to board her. We learn that she left Hamburg on the 1st April; called at Cuxhaven and left on the 6th; was eight days before clearing the English Channel. Fell in with the N.E. trades on the 25th, in long. 29deg. N. lat. 20deg. 30min. W. Crossed the Equator on the 8th May, in long. 24deg. 25min. W.; ran through the S.E. trades in long. 27deg. 53min. S., lat. 30deg. W. Met with variable winds, chiefly from the southward. Passed the meridian, of the Cape on the 8th June, in lat. 42deg. S., and ran down the easting in lat. 42deg. S. to 49deg. S. Passed the meridian of Hobarton on the 2nd July, in lat. 45deg. S. Entered Cook Strait at noon on the 9th ; struck soundings same day at 8 p.m.; took pilot, and dropped anchor in the harbor about 12.30 p.m. yesterday. Captain Paul reports speaking the ship Amander on the 22nd May.” New Zealand Times, 2 August 1875, p 7

“The Wellington today took away 72 adults, passengers by the Lammershagen, and bound for Westland. They will be transhipped at Nelson. 59 adults, destined for Taranaki, were also taken by the Wellington. The remaining immigrants could not be landed today, as there was no small steamer in port to convey them ashore. Two more births have occurred on board since the vessel’s arrival in harbor.” Evening Post, 13 July 1875, p 2

“Amongst the immigrants by the Lammershagen are representatives of many nations—Poles, Danes, Swedes, Germans, and Italian’s. Among the latter are .a gang of ten men who have worked together as navvies on the Mount Cenis tunnel and the Suez Canal. They were anxious to obtain employment in a body, and Mr. M’Kirdy has, we learn, offered it to them on his railway works.” Evening Post, 13 July 1875, p 2

“LATEST INTELLIGENCE. WELLINGTON. The s.s. ‘Wellington’ has gone to the ship ‘Lammershagen’ for the German immigrants for Taranaki, and sails for the North immediately they are taken aboard.” Taranaki Herald, 14 July 1875, p 2

“A number of the Lammershagen’s immigrants were brought over this afternoon by the schooner Florence, and were landed at the Queen’s wharf, where they were received by a crowd of their fellow-country-men.” Evening Post, 14 July 1875, p 2

“TELEGRAPHIC NEWS. The Star’s correspondents supply the following: – Wellington, Thursday. The last of the Lammershagen’s immigrants were landed to day. They are a clean and healthy lot—very German-looking.” New Zealand Herald, 16 July 1875, p 2

“Arrival Of German Immigrants.— The s.s. ‘Wellington’ brought on Thursday between seventy and eighty German immigrants per ‘Lamershagen’ whose arrival in Wellington we announced in our last. The immigrants arc chiefly of the farming class, and appear to be a sturdy, healthy lot of people. A few of them, we learn, have been employed in grape growing and wine making, and come from the districts on the Rhine.” Taranaki Herald, 17 July 1875, p2

“Auction Advertisements. IMMIGRATION. NOTICE. THE Scandinavian Immigrants, ex “Lammershagen” consisting of Farm Laborers, Blacksmiths, Carpenters, and Domestic Servants, will be open for ENGAGEMENT at the Barracks, Hokitika, between the hours of 11 a.m. and 4 p.m. on and after MONDAY the 19th instant. F. A. LEARMONTH, Immigration Officer.” West Coast Times, 19 July 1875, p 3

“Enclosure in No. 6. Commissioners’ Report on ship ” Lammershagen.” Sir, — Immigration Office, Wellington, 21st July, 1875. We have to report the arrival of the German ship “Lammershagen” on Sunday, the 11th instant, with 330 statute adults, from Hamburg, there having been six births and five deaths, equal to one and a half adults, during the voyage. Early on the 12th we mustered the immigrants and inspected the vessel, when we were pleased to find everything to our satisfaction. The deck-houses, by means of which access was gained to the ‘tween-decks, were particularly good, and similar constructions have been before recommended by us for use in British vessels carrying immigrants to this colony. The ladders and fittings generally were much more substantial than in English vessels. The married people were located under the poop and also in the ‘tween-decks, they having the use of the after and main hatches; the compartment was roomy and well ventilated; we considered it rather dark however, but, as our inspection took place during an exceedingly heavy rain-squall, it was explained to us that the compartment was darker than it usually was, as the doors of the deck-houses were shut and other means of lighting were covered over. The single girls were berthed under the poop; their compartment was an exceedingly comfortable one, and they had an excellent bath-room; the single men’s compartment was under the fore-hatch, and was clean, roomy, and well ventilated. The means of ventilation throughout this vessel were particularly good, in fact we may say better than in any vessel we have yet inspected. The male hospital on deck, and the female hospital under the poop, were well ventilated and convenient, as also was the dispensary, which was under the poop. The galley and condenser was good. The immigrants generally were healthy and of good physique, and, so far as we could ascertain, there was little or no organic disease amongst them. We regret to report, however, that two of the single girls were confined on board, and were still in bed at the time of our inspection; their names are, C- P-, 32, and P- B-, 24. We mention this fact in order that inquiries may be instituted as to how they obtained their certificates of character. In conclusion, we recommend the payment of gratuities, and we think that every praise is due to Captain Paul, Surgeon-Superintendent Feilberg, and the officers of the ship, for the very creditable manner in which she was brought into port. Alexander Johnston, M.D., H. J. H. Eliott, His Honor the Superintendent, Wellington, John Holliday.” Appendix To The Journals Of The House Of Representatives, 1876, D-3.

“The immigrants per the Lammershagen were landed this morning from the Manawatu and accommodated at the Immigration barracks. They comprise in all 90 souls, making 67 adults, made up of 18 families, 18 single men, and one single girl, and include Germans, Swedes, Norwegians, Italians, and Swiss. The whole of them are totally unacquainted with the English language, so that this may operate as a difficulty in getting them into situations, but, with the view of distributing them as widely as possible about the district, Mr Brewer intends forwarding 25 or more to Marton tomorrow by coach, and the balance he expects being able to forward per steamer to Patea. With this view he telegraphed this afternoon to the Government for instructions as to chartering the steamer Egmont, and it is therefore more than probable that they will be forwarded to that district. With such mixed nationalities it is impossible to form any opinion as to whether the immigrants will be found useful in this part of the globe. No doubt they comprise various trades and callings, but the absence of an interpreter renders it difficult to ascertain anything really very tangible on that point, and this fact to some extent shows, that it is very questionable indeed whether in the absence of any regular foreign settlement such immigrants are of that class really required by this Colony. The families in the depot appeared all clean and healthy enough, and may when fairly acclimatized get on very well, but it will take a very considerable time before much can be expected from them.” Wanganui Herald, 22 July 1875, p 2

“The Patea Mail observes :— “That a batch of immigrants ex “Lammershagen” have arrived, whom it is thought will not readily obtain employment, on account of their ignorance of the English language.” West Coast Times, 7 August 1875, p 2 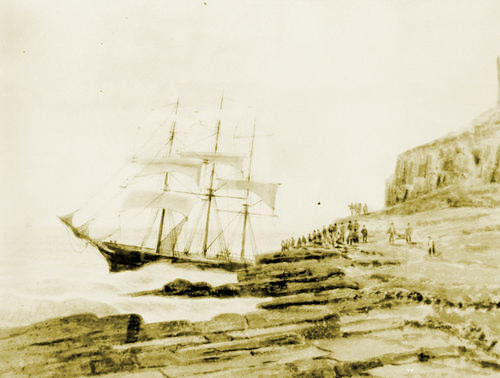 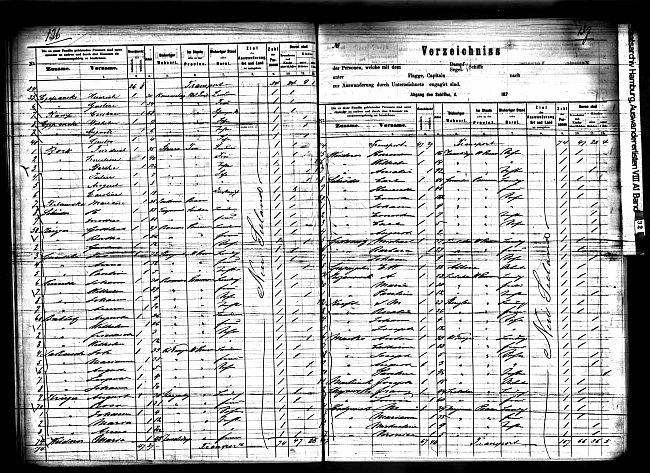 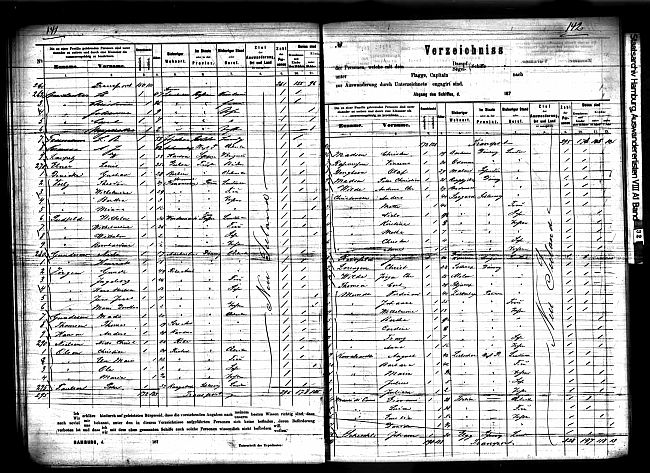