“THE DALLAM TOWER. The fine iron ship, Dallam Tower, sailed from Gravesend on 22nd December, and experienced strong adverse gales in the Channel, landing the pilot at Plymouth, and taking her final departure on Christmas Day. Light-head winds and calms chiefly were met with until after passing the Canary Islands; fair; winds and fine weather subsequently prevailing. The Shares were sighted last Wednesday, the run from land to land thus having been made in 74 days. Otago Heads were passed next day. Contrary winds were encountered on the Coast, and it took six days more to reach Wellington Heads, where Pilot Holmes was shipped yesterday morning, the passage from Plymouth being completed in 85 days, and the entire voyage, from Gravesend, as stated yesterday, in 85 days. This is one of the best runs of the present season, for it should be noted that had the Dallam Tower been bound for Port Chalmers, she would have reached that port (which she passed on the 10th) on the 75th day /from Plymouth, As already mentioned, the number of immigrants on aboard is 257 statute, adults, of whom 138 are for this port and 119 for Otago. Their health has been good during the voyage. Nine. deaths occurred, all being of children.” Evening Post, 18 March 1875, p 2

“ARRIVAL OF THE DALLAM TOWER. The magnificent iron ship Dallam Tower, 1499 tons register, Captain William Campbell, arrived from London at two o’clock yesterday afternoon, after a comparatively fair and rapid passage of eighty-five days from port to port, and eighty-one days from pilot to pilot. The ship comes into harbor in excellent condition, and presented a very pretty appearance as she rounded Cow Bay Point yesterday, with all her working canvas set. Fortunately, a light southerly breeze came up early yesterday morning, which Captain Campbell took advantage of, a very short time elapsing from the time the vessel was first signalled till she had dropped anchor. Pilot Holmes boarded the ship outside the reef, but his duties on this occasion were comparatively light, and, happily, he had not to run aloft the now familiar Q flag. The Dallam Tower, as she lies in Wellington harbor, presents a very different appearance from what she did on her last voyage to Australasia, when, it will be remembered, she put into Port Philip, on her voyage to Otago, an almost total wreck, having lost all her spars and bulwarks in a severe gale between the Cape of Good Hope and Australia. The vessel was then bound to Port Chalmers. After refitting at a cost of over £9OOO, she resumed her voyage to Port Chalmers, where she loaded colonial produce for Loudon. The voyage just concluded has been an uneventful one, moderately fair weather and winds making the run very pleasant till the New Zealand coast was reached. New Zealand was first sighted to the southward of Otago—the vessel having come south about—on the 11th instant, since when the Dallam Tower has had all kinds of weather but favorable, calms and N.W. gales following each other in rapid succession. There were nine deaths during the voyage—one adult and eight infants, five of whom died of bronchitis and three in convulsions. The adult succumbed to heart disease.

The Dallam Tower left Gravesend on the 22nd of December, strong westerly gales opposing her progress down the British Channel, the pilot being landed at Plymouth on the night of the 26th. Light head winds and calms prevailed from the Lizard to the Canaries. Prom those islands till the Snares were passed, on Wednesday last, the weather was remarkably fine. Kan past Port Chalmers heads on Thursday, the land being well in sight, and arrived here yesterday. The Dallam Tower is under charter to the New Zealand Shipping Company,’ and is consequently consigned to Messrs. Johnston and Co., the Company’s agents in Wellington. She will be entered at the Customs this morning.” New Zealand, 18 March 1875, p 2

“The Dallam Tower’s immigrants were landed to-day. They are a suitable-looking lot, healthy looking, and comfortably clad. There are few old persons, and a large proportion of very young people.” Press, 19 March 1875, p 2

“Arrangements were made by the Immigration Officer with Mr. William Bishop, agent for the only steamer in port, by which all the immigrant, who arrived by the ship Dallam Tower, with their luggage, were landed by the steamer Southern Cross yesterday, They appeared to be a healthy and respectable lot of people, their apparel proclaiming them to be of the better class of immigrants. They speak in excellent terms of the kind treatment they received at the hands of Captain Campbell, Dr. Hosking, and the officers of the ship. The quality of the provisions supplied was all that could be desired, but complaints have been made of the incapacity of the cook furnished by the Emigration department, roomy and comfortable quarters were provided in the ’tween decks for all the immigrants, the comfort of the married people having been particularly well looked after. Those of the immigrants whose destination is Port Chalmers will be forwarded on early next week, and as two of their number are suffering from phthisis, it is probable Dr. Hosking (who was engaged at London to proceed to Otago) will accompany them.” New Zealand Times, 19 March 1875, p 2

“Mr Collin Allan has been informed by telegram that the Taranaki left Wellington with 146 immigrants, per Dallam Tower, for Port Chalmers, 32 of whom are nominated for Southland.” Otago Daily Times, 23 March 1875, p 2

The Taranaki sailed to Otago with 160 of the Dallam Tower immigrants on March 22nd. A number of passengers travelled on to Invercargill taking the ship Wanganui to Bluff. 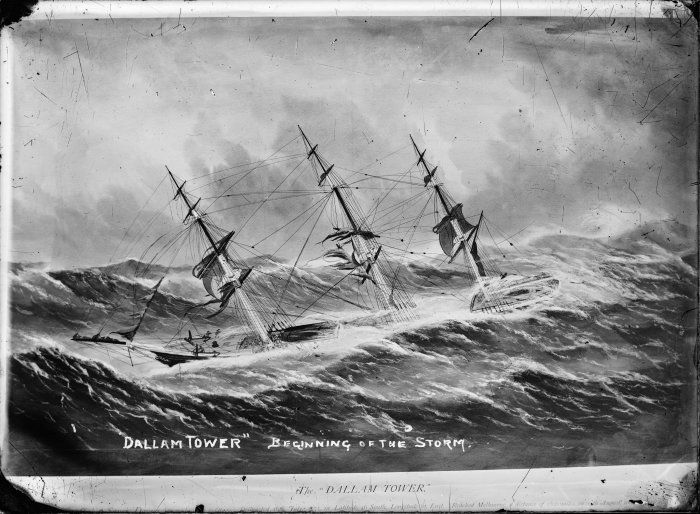 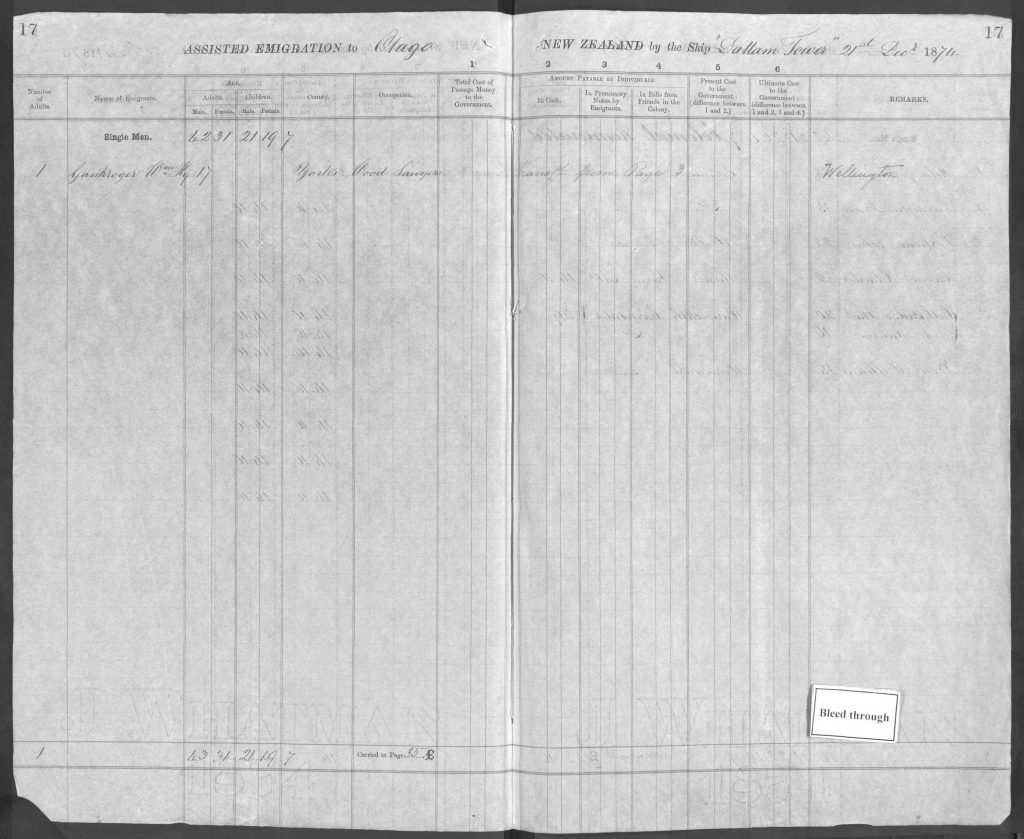