Julius Charles Eberhard Matthies (1830-1875) migrated from Hamburg to Melbourne 19 Jul 1854 aboard the J. W. A. Lornezen. He married Mary Cummings in 1860 in Victoria and had their first child, John Julius in 1860 at Bendigo.  They migrated to New Zealand from Victoria on I Aug 1862 arriving at Otago aboard the Ring Dove.  They settled at Hokitika where Julius set up business as a Cabinet-Maker & upholsterer in Weld Street. He is more renowned for his work for the Vogel administration as an Immigration Agent bringing people from his birthplace to help build New Zealand infrastructure.  His father Johann David Matthies died in 1872 and so returned home to claim the family inheritance in 1875.  Julius was warned here on his return regarding the German Authorities who were against any migration of families with sons who were required for compulsory Army recruitment.  He was caught and imprisoned and died as a result of inflammation of the brain on 7 July 1875. 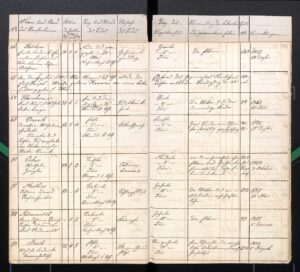