On behalf of the Board, I am pleased to present my Annual Report on the activities of the Trust which took place during the last 12 months. These activities benefited the local and wider New Zealand communities in many ways, while we were working steadily, towards focusing on our Trust’s objectives, specifically:

On the 10th of May, against all odds, as nobody in Dunedin wanted to undertake a sponsorship of a Polish artist, we organised a piano recital given by the world renowned and eminent pianist, Raphael Alexandre Lustchevsky. He was in New Zealand performing a series of concerts in commemoration of the Centennial of Poland’s regained independence, to audiences in Auckland, Christchurch, and Wellington and thanks to POHOS culminating in Dunedin at Marama Hall. Raphael has a diverse repertoire of more than 30 concertos for piano and orchestra, and his Dunedin program was, as follows: 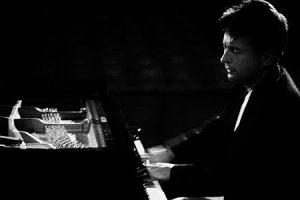 Our thanks go to Bozena & Alfred Haug for hosting Rafal, Otago University Music Department and specially prof.Terrance Dennis for helping with organization and marketing. Special thanks to Anna & Corran Munro for going completely out of their way by driving Rafal to Queenstown, when his flight from Dunedin was cancelled due to the weather, so he did not miss his international connection. 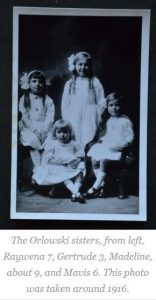 We received a big thank you from Mrs. Madeline Anderson nee Orlowski and her daughter, Heather List, for the flowers she received on her birthday from POHOS. On the 4th of May 1907, well before World War I, Madeline was born in the family home in Dunedin. Her parents were John Orlowski son of the original Polish settlers in Waihola. Madeline’s 111th birthday made her not only the oldest person in New Zealand but also the last direct descendant from the original Polish settlers. Both her grandparents immigrated to NZ in 1872.

During the winter months meetings of the Polish community were taking place on the 3rd Sunday of the month, with mass celebration, as usual, at the Broad Bay Church.

Beginning of the preparations for the celebration of the 20th Anniversary of forming the Polish Heritage of Otago and Southland Charitable Trust (POHOS). 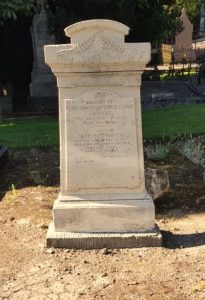 We also undertook a project to restore a grave in the Southern Cemetery of Prince Alois Konstantine Drucki-Lubecki, as it was badly neglected and damaged by age and, Monumental Stone Masons are making good progress to date. The actual headstone is upright now, it was laying down broken in half. The next phase is clearing and building stone corners with a chain to mark the grave itself. We also asked Monumental  Stone Masons for a quotation to restore the inscription. The Polish Embassy is helping with the financing of the work and we will supply hard labour at the final stages to clear the plot and plant some small evergreen, hardy plants. 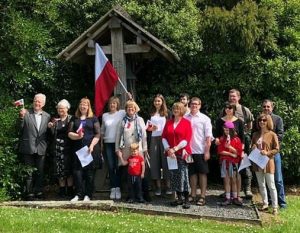 11th of November The Polish Community came together at Broad Bay Church to mark the occasion of Armistice Day by bell ringing. The 100 anniversary of the Armistice Day has a special significance for Polish communities all around the world as it marks regaining autonomy for Polish nation after 123 years of oppression by invaders from the Russian, Prussian and Austro-Hungarian Empires.

On the Saturday, 17th of November at Toitu Otago Settlers Museum the POHOS Board held a public talk and Power Point presentation about the history and activities of our Trust. Big thank you for Toitu Otago Settlers Museum for allowing us to use their facility and help with marketing the event. The auditorium was full and our presentation was very well received by the audience. We managed to hold everybody’s attention for nearly hour and half and then we served tea, coffee and white and red cupcakes, as we do traditionally. Comments from the general public were very complementary and, most people admitted that they surprisingly learned new and interesting facts about the history of Poland and New Zealand.

The Power Point display had 47 pages full of images and photos so at the end of the report I will just attach a script to the presentation and a list of all our board members over last 20 years to acknowledge all their hard work and dedication to our goals. 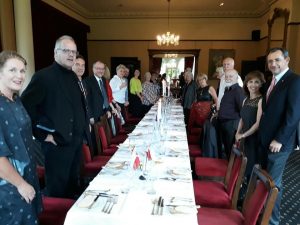 Next to follow was a celebratory dinner at the Dunedin Club. Invited guests included current and past board members, one of the founding members of POHOS, who had flown from Auckland to join us, John Roy-Wojciechowski and representatives of Dunedin’s institutions that had work closely with our trust over the years. 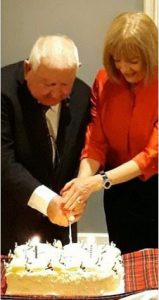 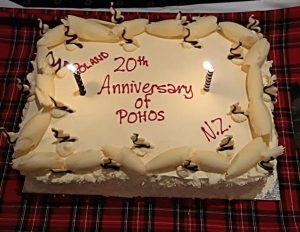 The Broad Bay and wider Dunedin Polish community members gathered for a celebratory mass to mark the 20th Anniversary of the Polish Heritage of Otago and Southland Charitable Trust. Father Merv Hanifin retold the church’s history and how it was moved from Waihola to its present location. Cake and tea followed. 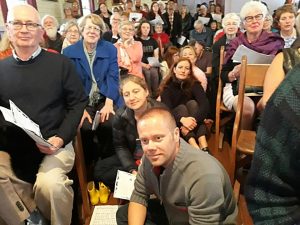 Our traditional Christmas Carols event at Broad Bay Church as usual, attracted a large crowd from the Broad Bay community, and Polish and international communities. Carols are sung in 7 languages. Our special Guest this year came from Christchuch – Honorary Polish Consul Winsome Dormer.

Peter Hayden was the master of Ceremony.

We were privileged to meet Shane Worboys who is the great great grandson of Mr. Orlowski who helped build the church of Mary Queen of Peace, formerly St. Hyacinth of Waihola. The Orlowski Family donated the baptismal font.

For the first time in the church’s contemporary history the church’s doors were opened for a Christmas Mass. Further at this Christmas Day Mass, our guests of honour were The Polish Ambassador Zbigniew Gniatkowski and The Polish Consul Agnieszka Kacperska. 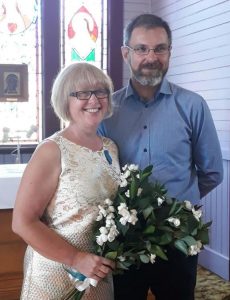 We were and remain delighted to hear that Cecylia Klobukowska, one of the founding members, and over the last 20th years, a very active and hardworking board member, serving as Chairperson and Treasurer for several years had been awarded by the President of Poland Knight’s Cross of the Order of Merit of the Republic of Poland 🇵🇱 / Krzyz Kawalerski Orderu Odrodzenia Polski. The Polish Ambassador to New Zealand, Zbigniew Gniatkowski had conferred the Cross to Cecylia after the Christmas Mass at Broad Bay Church on Tuesday 25.12.2018.

Big, big congratulation to Cecylia, as this is one of the highest honours that can be bestowed to a Polish citizen and it was well deserved.

On the invitation of the Polish Heritage Trust Museum in Howick, initiated by John Roy Wojciechowski, Paul Klemick visited their archives in the Auckland. The Museum staff were pleased that Polish genealogist Paul Klemick, of the Polish Heritage Trust of Otago & Southland Trust based in Dunedin, was able to share a wealth of information with them. The co-operation and exchange of the research results will be an on-going process.
Paul has an in-depth knowledge of early Polish settlement in New Zealand, gained during multiple trips to Poland and extensive research of Polish church records, maps, shipping lists and family connections of Polish Settlers who arrived in the ‘Vogel years’ (1870s) originating in former Prussian and Pomeranian Areas.

Fat Thursday traditions have long since spread far beyond Poland’s borders. Celebrated in the United States on Fat Tuesday or Mardi Gras – the day before Ash Wednesday – ‘Pączki Day’ has become a tradition in ‘Little Polands’ across the country. 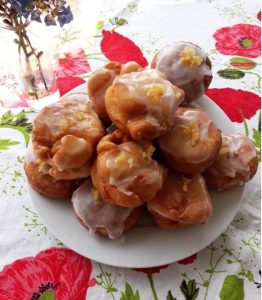 Fat Thursday was celebrated at Monika Gamble house where Polish community members (new & old) were invited. We are so pleased to welcome to our community several new arrivals, especially as they are young couples with young families, so we can look into the future re-assured that a new generation will continue with the Trust’s objectives.

Ongoing and future projects/work in progress:

And a big project/celebration for April 2019:

I would like to acknowledge the support we received from:

Finally, my great gratitude goes to the current POHOS Board members

Monika Wrukowska Gamble stepped down from her function as the treasurer and a board member due to family, work and study commitments. We are sorry to lose her from the board as she was very active and a loyal partner bringing to the board a happy and easy going attitude. We wish her all the best in her upcoming exams and future career and we are sure she will support and participate with us from the membership level.

I am very proud of the Trust’s considerable achievements as a result of hard, conscientious and totally voluntary work of all Members of the Board and the Polish Community.

Recipient of Gold Cross of Merit of the Republic of Poland