On behalf of the Board, I am pleased to present my Annual Report on the activities of the Trust which took place during the last 12 months. These activities benefited local and wider New Zealand communities in many ways while we were working steadily towards achieving our Trust’s objectives of:

This year’s activities were dominated by 2 major events:

Throughout the winter months we have had extensive consultation with Philippa Keaney from the Settlers Museum.  She attended several of our board meetings resulting in the following display at the Museum:

THE 140th Anniversary of ‘PALMERSTON POLES’ 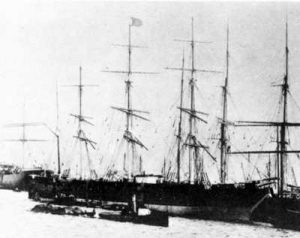 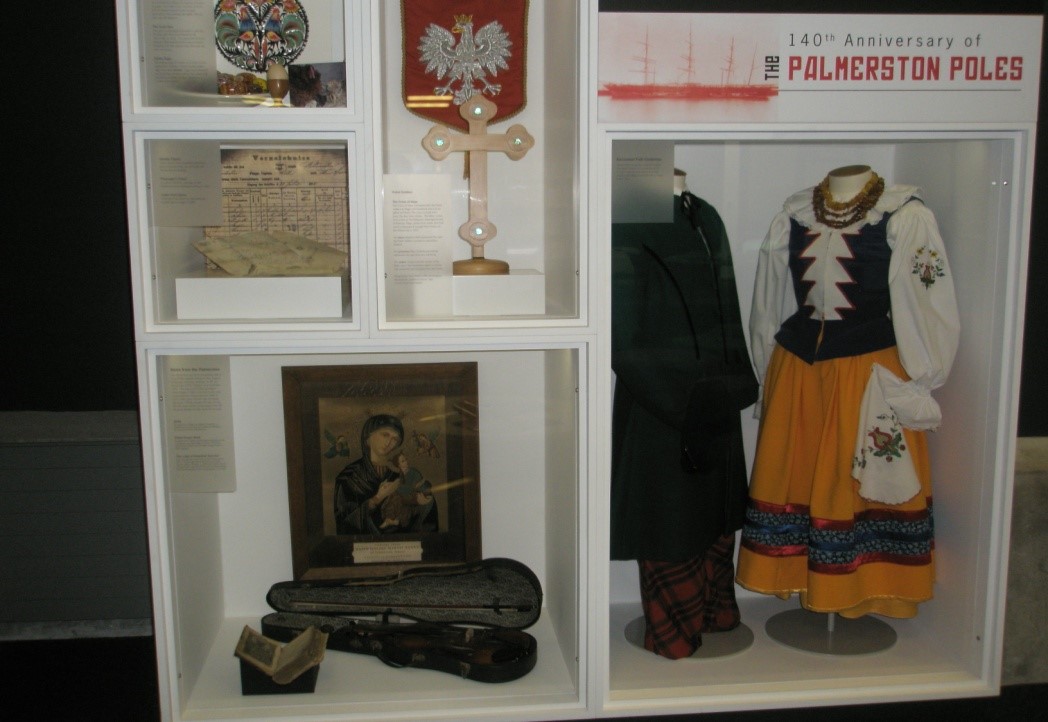 “These costumes are for a married couple. The tartan trousers are a reminder of the Scottish migrants who went to Kociewie, Poland, and settled around the city of Tczew in the 1700s.”

There were further smaller cubicles:

Display in the top left cubicle …….   Wycinanki (paper cutting) …… and the following explanation ….

“Polish paper cutting, or wycinanki, involves the symmetrical cutting and layering of pieces of paper. It is a distinctive rural folk art form, with techniques passed down through generations and evolving into highly intricate and colourful patterns.”

The Curly Hen   …….  Paul & Eva Baumgardt brought a curly hen (Frizzle) with them from Poland on the Palmerston in 1872. Four generations of the Bungard (Baumgardt) family have continued breeding from the original Curly Hen over the past 140 years.

Easter Eggs …… Decorating eggs for Easter is a Polish custom going back centuries. Dyed and decorated eggs are called pisanki. Eggs are exchanged among family members before the ceremonial breakfast on Easter Sunday morning as a symbol of friendship.

Display in the middle left cubicle …… Identity Papers  ….. These papers were provided by the local priest when the Poles set off to join the Palmerston at Hamburg.

Passenger’s Ticket …… A contract ticket for passage on the Palmerston from Hamburg to Otago in 1872.

Letter from Home ……. Greetings from Poland to New Zealand; a letter sent to Otago in 1894.

Display in the bottom left cubicle ……. Items from the Palmerston …… The Palmerston was the first immigrant ship to bring Polish migrants directly to New Zealand. It departed Hamburg, Germany, on 29th July and arrived at Port Chalmers on 6 December 1872. The ship carried 228 passengers under Captain P Kolln, a German master who commanded the Palmerston from 1866 to 1874. There were 19 births and 19 deaths during the 130-day voyage, the ship arriving with the same number of passengers who left Hamburg despite the high death toll en route.

Violin ……. Brought from Poland by August Orlowski, a Palmerston passenger who settled at Waihola.

On loan from Denise McMurtrie. ……. Polish Prayer Book ……. Brought from Poland by Mariana Walinska on the immigrant ship Reichstag in 1874.

The Poles aboard the Palmerston brought similar books in their luggage.

“Our Lady of Perpetual Succour” ….. This holy picture came out on the Palmerston in 1872. It was later presented to the Catholic church built in Waihola in 1899 and named for St Hyacinth (the “apostle of Poland”) to acknowledge the Polish heritage of the congregation it served.

Computer screens are placed all around the Museum and at the press of a button visitors can listen to short stories told by descendants of immigrants to New Zealand.

I wish to express my appreciation and gratitude for your involvement in the “Our Voices” project for Toitu Otago Settlers Museum. The personal voices are a wonderful complement to the story of migration to Dunedin as it is told throughout the museum’s exhibition spaces.

The first ten days in December must have been the busiest time in POHOS 15 year history.

We were extremely lucky that 2 events coincided:

Official Opening of the Otago Settlers Museum
and
celebration of 140th Anniversary of arrival of Polish settlers in Port Chalmers.

During a very interesting meeting Winsome discussed business opportunities opening up between Poland & NZ, especially when an official announcement of Emirates cheaper and direct flights between our two countries was imminent.

We also discussed the possibility of ‘complimentary’ cities on the opposite sides of the world – Dunedin and Gdansk.  Such a relationship would benefit all of us, as both cities are busy ports and home to large universities. Thus the scope of cultural and economic exchanges could be immense.

11:15am          Official Opening of Toitu Otage Settlers Museum. Amongst the official guests were representatives of POHOS and the Honorary Polish Consul for the South Island, Winsome Dormer.

8:00pm            Drinks at Fletcher Lodge, attended by about 40 guests including the Honorary Polish Consul, members and friends of POHOS.

Late afternoon arrival, unfortunately delayed by a day because of bad weather in Wellington, of  the Polish Ambassador – Beata Stoczynka and her husband the Polish Consul – Slawomir Stoczynski

THE OTAGO WITNESS recorded that “on 6 December 1872 the Palmerston arrived (at Port Chalmers), 130 days out from Hamburg with 220 immigrants”.  Many of those that arrived were our grand-parents and great grand-parents and for some even another “great” or two may be added.

In recognition of this event the Trust organized celebrations that were held at Port Chalmers.

Carol Meikle set up a wonderful display of sandwiches, cakes and pikelets.

Local historian, Ian Church, was our host and we walked across the road to the Port Chalmers Museum for a guided tour. From the Museum a rented bus took us on a fascinating tour around historical sites of Port Chalmers. Ian Church’s commentary was informative and entertaining and his banter with Carol Meikle (both born in Port Charmers) gave much humour to the tour.

About 40 POHOS members and their families attended. It was a great opportunity to catch-up with old friends and meet some new and potential members.

6:00pm – The entrance to the Hall was decorated with Polish flags, and the Polish flag was also flying high on the flagstaff at the entrance to the port. Arriving guests appreciated the sight and sound of Laura Barton dressed in Polish traditional costume playing the violin. Drinks and snacks followed.

Then we walked across the road to the Port Chalmers Museum where the Polish Ambassador, Beata Stoczynska, unveiled a plaque, donated by the Trust, commemorating the arrival of the Palmerston.

The Banqueting Hall was decorated in traditional colours with white & red flower posies on the tables. Carol Meikle designed and printed wonderful table mats to be taken home by our guests, together with beautifully presented ‘Perniczki’ (Polish honey cakes), as souvenirs. 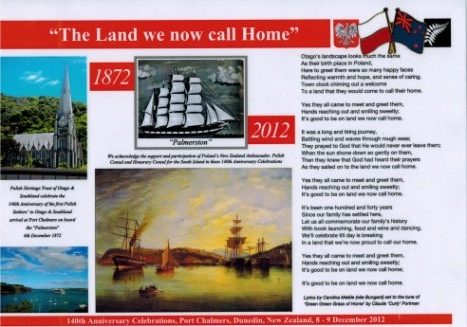 7:00pm – Formal 3 course dinner for 120 guests was served and Laura Barton played on the violin ‘Kaprys Polski” by the Polish composer Grazyna Bacewicz. After dinner a commemorative cake was formally cut by descendants of the Palmerston immigrants.

The whole event, ‘a day in Port Chalmers’ was absolutely fantastic, interesting, funny, friendly, moving, informative and very well organized. All thanks must be directed to Carol Meikle, whose unbelievable energy and enthusiasm conquered all big and small obstacles and delivered a faultless result.

Lead by Liah Carrell the group received a very warm reception during on-going celebrations for the opening of the Otago Settlers Museum International Day.

Our special thanks go to Liah for many months of teaching, choreographing and directing the young generation of dancers with unflagging good spirits.

Tuesday 18th December – Our traditional Christmas Carols evening was attended by so many Polish and Broad Bay Community families that the latecomers had standing room only.
Carols were sung in English, Polish, German, Spanish, Dutch & Maori and Peter Hayden reading of Charles Dickens was wonderful.

Support and Maintenance of Historical Polish Heritage in New Zealand

The historic Polish Church, Mary Queen of Peace at Broad Bay on the Otago Peninsula is an all year round work in progress. We also maintain the gardens surrounding the Church.

Co-operation with Other Historical Trusts and Organizations

The Trust is a Member of the Otago Settlers Association and the Taieri Historical Society.

We co-operate with the Port Chalmers Historical Society and the Polish Heritage Trusts and Associations in Auckland, Wellington, Christchurch, Waikato and Bay of Plenty.

It has been an honour and privilege to be part of the Board dedicated to the Polish Heritage of Otago and Southland. Thank you for your commitment, reliability and dedicated work.