The Polish Heritage of Otago and Southland Charitable Trust (POHOS)

THE 4TH ANNUAL REPORT OF

It gives me great pleasure to present the 4th Annual Report of the Polish Heritage of Otago 7 Southland Charitable Trust, December 2001 to November 2002.

Our first achievement this year was receiving first prize in the Heritage and Environmental category of the 2001 TrustPower Dunedin City Community Awards. TrustPower, in partnership with Dunedin City Council, organises these awards which recognise voluntary organisations and groups in the City of Dunedin that dedicate voluntary time and energy in improving the Dunedin City community. Ludmila Sakowski our Treasurer, was responsible for compiling our presentation and the prize money of $500 was received by Russell Chiles, our Secretary, and Ludmila on our Behalf.

Our Picnic Barbeque this year was held at the Woodhaugh Gardens. After a very cold and windy start to the day, the sun came out and an enjoyable game of Cricket was played on the green.   Some of us then visited Stefania Zurakowska, a member of our Trust, who had been honoured by the Polish Government with a Military promotion to the rank of Second Lieutenant.  We presented Stefania with a bouquet of Red and White flowers.

In December, Trust members combined with the Harwood community for an Ecumenical Carol service, where our Polonia Dance Group entertained and sang two songs in Polish.

Also at the December Christmas Mass at the Mary, Queen of Peace Church, Broad Bay, Christmas tree decorations were distributed to the congregation. These were in the form of silver balls and were decorated by members.

Once again, in January, our Community Art Gallery Exhibitin was a success, raising $300 for the restoration of the historical Bell.   Over 700 visitors viewed the exhibition, they came from many countries, including Canada, USA, Holland, Great Britain, Australia, Czech Republic, Germany, France and Poland. 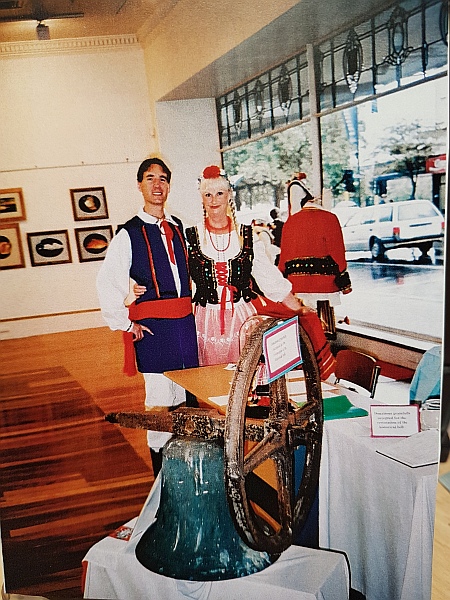 Every Easter, members decorate eggs which we distribute at the Easter Mass.   This is a Polish traditi0on as the egg is a symbol of life.

The Anzac Day Dawn Service was well attended by members and Cecylia Klobukowska and Stefania Zurakowska laid a wreath at the Cenotaph on our behalf.

The Poland National Day was celebrated on 3 May.   The Polish flag was flown from the Civic Centre building in the Octagon.   Mass was celebrated by Father Maloney at the Mary, Queen of Peace Church, Broad Bay which was well attended by members.   After Mass, members gathered at the Cedar Club where our Dance Polonis Group performed, and then each member of the Board gave a short talk about their background and Polish roots.   Our special guest was the Acting Mayor, Elizabeth Hanan, who congratulated us on our successful group and our achievements.   Member of the other ethnic groups in the city also attended.   Traditional Polish food was served and enjoyed.

In July, Paul Klemick showed a Video and photos of Polish villages and churches where our ancestors came from.

To commemorate All Souls Day this year, we gathered at the Allanton Cemetery, where we lit candles and prayed for our deceased relatives and friends.   We then travelled to Betty and Colin Bungard’s farm at Waihola, where we enjoyed a lovely meal and the young people were able to feed the new lambs.   After the meal, we moved to the Waihola Cemetery and again lit candles and said prayers. 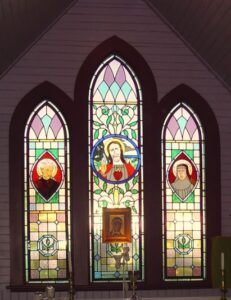 The attendance at the Mary, Queen of Peace Church continues to increase.   Mass is celebrated on the fourth Sunday of each month at 9.a.m.   As well as being a spiritual experience, it is also a social gathering with Tea, Coffee and a chat after Mass.   Special thanks to Father Maloney and Sister Kathleen for their continued support.   Work on the restoration of the Bell continues.   Thank also to Ludmila Sakowski for her efforts in the project.

The Dance Polonia Group have been very active this year, dancing for the Heritage of Dance Festival, Waverly Parish, Gore Lions Club, Grants Braes Union Church and St Clair Womans Club.   They will also be dancing in Oamaru at their Historical Fete on the 17 November.   My heartfelt thanks to Angela Donaldson and Rena McIntyre who have spent many hours in teaching and organising the Dancers to give a polished performance.

Czeslaw Panek, Cecylia Klobukowsa and myself have given talks around Otago on Poland and Settlers.

We are now members of the Taieri Historical Society Inc.   Some members take a turn on duty on Sunday at the Museum in Outram.   The Trust will arrange a Polish display in one of the historical buildings very soon.

In the future, we hope to establish a Kociewie Museum in Dunedin.   We will be given exhibits for display, they will be the regional folk costumes and long forgotten tools used in everyday life of peasants in the past centuries.   This will be an excellent promotion of Kociewie in New Zealand.   Photographs and our history have already been sent to Andrzej Blazynski, the Director of the Kociewie Region Museum in Starogard near Gdansk, Poland.

We are grateful to the Otago Peninsula Trust for thei donation of $1,000, which we will put to good use.

We appreciate very much the efforts of our men in painting of the Church.

I would like to thank the following members for their contribution during the year, namely Magda Sakowska for continuing the challenge of compiling the Newsletter, Mariusz Nowostawski for his efforts with the Trust’s Web site, and Cecylia Klobukowska for the cleaning of the Church and preparation of the Liturgy.

Special thanks to Ludmila Sakowska, who is retiring from her role as Treasurer, we appreciate the service she has given us.

Thank you to John Devereux for acting as our Auditor.

Thanks also to our honorary members, John Roy-Wojciechowski, the Honorary Counsul to New Zealand of the Republic of Poland and Czeslawa Panek for their contribution and support.

Again, I thank the Board members, their husbands/wives and families, for all the tasks that they have carried out in the interest off the Trust.

Thanks also to my husband, Keith, and my family for their untiring support and understanding which has enabled me to devote the time necessary to carry out my duties as Chairperson.

Also, thanks to the member who have supported me over the past two years and I appreciate the ongoing friendships.

Special thanks to our Secretary, Russell Chiles.   I appreciate the support and guidance ha has given me during my term.   Thank you on behalf of the Board and myself for your untiring work.

I wish to welcome the incoming Chairperson and assure them of my support.   A special welcome to our two new members of the Board, Gaynor Scott and Ula Nowostawska.

I feel we have had a very successful year and have achieved the aims of the Trust’s Deed.   We have promoted our heritage and culture to a wider range of the community, through the many ventures that we have been involved in.