Church of the Blessed Sacrament

The first known Mass celebrated in the district was at the home of Mr and Mrs Philip Heffernan, a sod hut on Middle Road, some 800m from Whiterig. Mrs Heffernan invited the few Catholics to their humble cottage when Father Larkins celebrated the first mass there sometime in the mid-1870s. In 1878, a number of Catholics from Waihola and Waipahi arrived in the region in the form of Polish refugees who brought with them the right skills to help build the main southern railway line through the district. Employed by Brogden and Sons, a good number of them decided to settle where John Buchols was successful in a ballot for a 200-acre section on the Pinnacle Road, less than two kilometres from Mcnab and the main railway line.  John sold allotments to his fellow country man in the intention of forming a small settlement there.  It soon inherited the name of Germantown. due to the language that was widely spoken in the area at the time.  Although the settlement was short lived, the community of Poles, Germans and Hungarians who settled there, have left their mark throughout the Southland district.  We are reminded for their contribution to the district, by the railway line which has served the region for the past 150 years.

However, a need for a church was now paramount for the growing parish and before the church was built, the marriage of John Ridsewski to Josephine Strepanski took place on 12 September 1880 at McKays Hall.

On the 28th of December 1882, the ‘Mission of Gore’ parish was established by Bishop Patrick Moran. On the 14th of October 1883, less than a year later, the Poles witnessed the opening of the Church of the Blessed Sacrament, situated some three and half kilometres away in Halton Street in East Gore.

Sunday last was red letter day in the annuals of Roman Catholicity in these parts, witnessing as it did the opening of the neat little church at Gordon just completed by Mr. T. Latham, the well-known contractor. The building occupies a good site. The exterior is plain and somewhat sombre looking; inside however, the church is decidedly comfortable looking, and the altar and its surroundings are of an exceedingly chaste and attractive design. When full, the building would probably seat some 250 people, and nearly this number assembled on Sunday last, wintry as the weather was.

A worse day in the whole year could scarcely have been selected, a biting South-west wind raging and heavy showers of rain falling at brief intervals. That there could have been such an attendance must have been gratifying to the resident priest, especially when it is considered that a charge of half-a-guinea was made for admission to the sacred edifice. Shortly after 11 o’clock the dedication and blessing proceeded; pontifical high mass being held. The celebrant was Bishop Moran, and the deacon and sub-deacon were Father Burke and Fitzgerald respectively. Throughout the ceremonial was almost impressive, this being in no small measure due to the efforts of a well-trained though small choir who had practised Mozart’s 12th Mass assiduously for the occasion. Mr. Brett presided at the organ, and Mrs. Brett rendered especially valuable assistance during the service, giving the parts allotted to her with a gracefulness and precision begotten only of a trained voice and great practice. The ceremony over, a collection was taken up, and we understand the gross proceeds of this, added to the tickets, will slightly exceed £100, an amount that would have been nearly doubled had the day been sufficiently fine to enable those living at a distance to be present at the ceremony. Still, it will reduce the debt on the church to £170. In the course of an address in the occasion,

Bishop Moran said that day was for all of them a memorable one, marking as it did an epoch in Catholicity in these parts. This holy and important dedication would have its yearly anniversary, and no other festival would take precedence of this one. But from another point of view special interest attached to this dedication, this second Sunday; October was the anniversary of the dedication of the churches of Ireland, the land from which most of those present had come. The associations connected with the day brought forth indescribable feelings. Not only did they bring to mind the land of their birth, but an epitome of the history of their country and church. He had told them the dedication of that church would be a memorable event in after years, but only to that church, not to other churches. If so, then why were they celebrating that day the history of all churches in Ireland? The answer would disclose an important and touching history of St Patrick, the singularly gifted apostle of Ireland, was sent there by the Pope after many long years of preparation for this important mission…

…Now, after waiting long, after many trials, they had succeeded in erecting that beautiful church. It was admirably finished and a credit to all connected with it – a monument of faith, piety, and generosity. He prayed Almighty God to take these things into consideration and bless them abundantly. But they must not forget that the erection of that church strengthened and increased obligations previously existing; it gave them graces and blessings which must be cultivated. They must be zealous in the discharge of all their religious duties. If, having the opportunity, they became lukewarm or indifferent the very sacrifices they had made to erect that building would be utterly misplaced. It was hardly to be expected, considering their position and their other needs, that the church would not unduly press them, and which he felt sure would be quickly wiped away. If it were possible, he would most earnestly desire that after that day no debt existed on the building, because it was now given to God and the gift should be complete. He urged that a complete gift to God should be made even at a little sacrifice. Everything we possessed had been given to us by this great and good God and why therefore should we be niggardly and avaricious, why should we fear to be generous to God, who had assured them that for the little they gave a hundredfold in this life would be returned and everlasting happiness in the next? 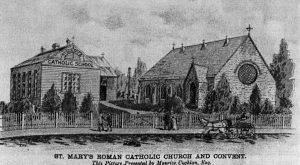 Before the proceedings terminated, Mr A. A. Macdonald, of Reaby, came forward and presented to the Bishop the following address, which was beautifully illuminated:

Address of the Catholics of Gore to His Lordship the Most Rev. Dr MORAN. May it please your Lordship-We come to offer you our respectful welcome and to show our gladness at seeing your Lordship amongst us-a gladness increased by reason of your being here to open our new church, the first Catholic Church in this Neighbourhood. Allow us to offer you our thanks for the marked consideration you have given this recently rising portion of your diocese, by raising it to the condition of an independent mission, by appointing a resident Priest here, by watching with care the progress of our little community and the erection of our church, and by coming to open it today with your own hands.

Allow us to express before you, our esteem of yourselves exclusively and from a motive of pure fraternal charity to the Christian education of children.

By reason of our small numbers, we are presently compelled to attend those schools in which no religious instruction is given: in which nothing is done to install into our minds respect for God and His religion-nothing to kindle in us a love for His church-nothing to tell us of its glorious history and traditions; but in which, on the contrary, we move in an uncatholic atmosphere; in which tone of thought and expression is bitterly hostile to our religion; in which, in fact everything even to the prize books put into our Catholic hands as a reward for our industry, breathes enmity to the Catholic church. Deprived of the advantages of Catholic schools and compelled to have recourse to the hostile State schools, how justly may not we envy the lot of children more fortunately situated, and how fervently should we not long for the time when a Catholic school shall be opened here?

Mindful then of your Lordship’s unceasing anxiety and labours to promote the true interest of the children of your flock, we approach you to express to you our feelings of gratitude and to offer you our little word of welcome on the occasion of your first visit to Gore.
Asking you Lordship’s blessing, we remain you Lordship’s very obedient and affectionate children.
Bishop Moran replied at considerable length. These addresses, he said, were beautiful compositions, and they contained statements peculiarly consoling to him at the present time…

…It pleased him to find they were so well instructed, and he firmly believed that at a fitting time they would do all they could to establish a Catholic school in Gore. He trusted the sentiments contained in these two addresses would be their sentiment forever, and that they would transmit them through their children to their children’s children.

In the evening the bishop again preached to a good congregation on the particular devotion of the present month-the Rosary. The discourse had special reference to prayer, and was attentively listened to throughout.“ Mataura Ensign, 19 October 1883