click on name or picture to go to Switala Family Tree at ancestry.com 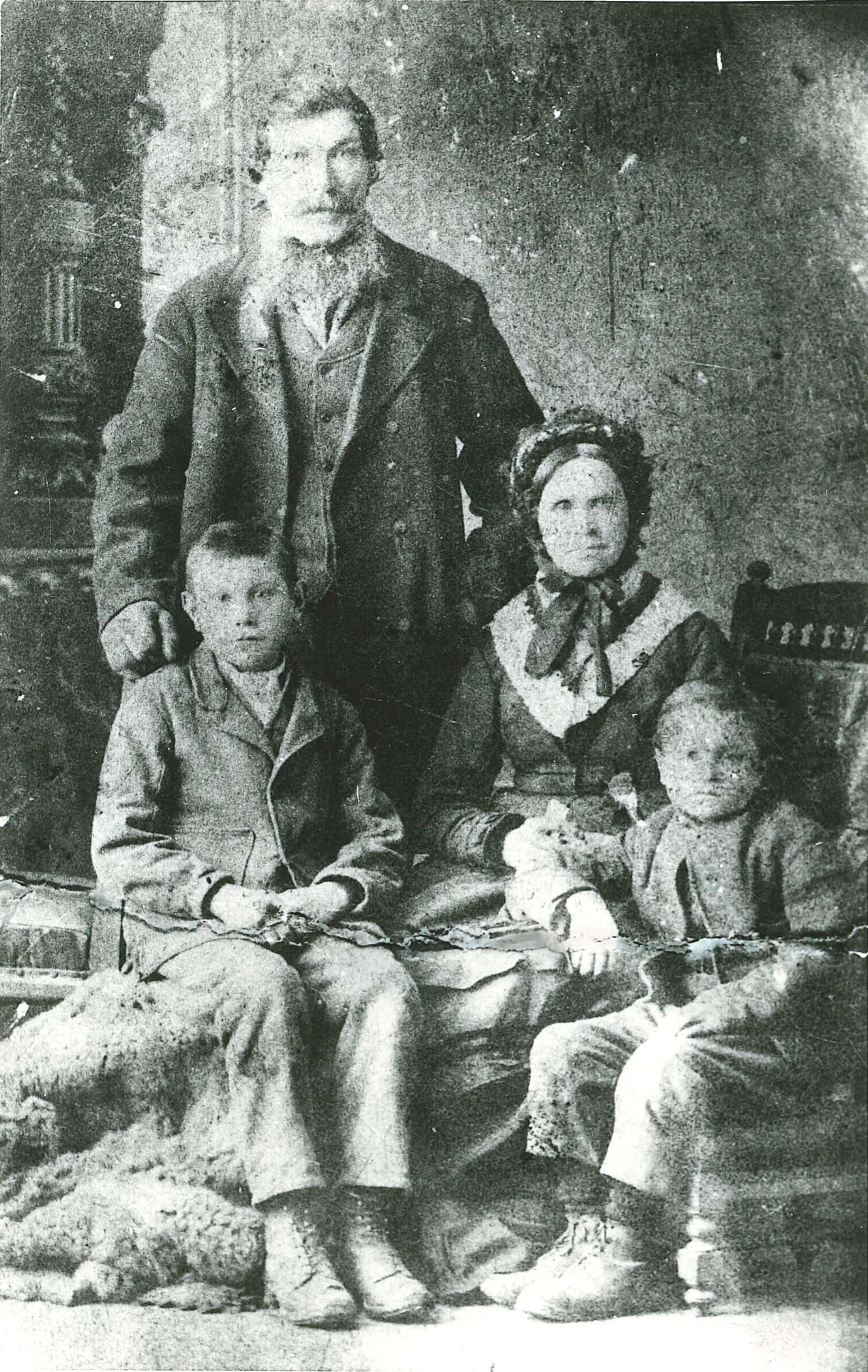 Listed aboard were: Johann Switala age 47, Francisca 45, Johann 17, Marianna 15, Michael 13, August 9, Jacob 5 and Anton 3.  They were sent to Soames Island for isolation before being sent to Dunedin where they were sent to the western compartment of the Caversham Immigration Barracks. From here they travelled south to Allanton where they settled and gave birth to Joseph (b. 1875–d. 1952) and a baby boy (b. 1878–d. 1878), who survived only three hours. According to the 1882′ Return of Freeholders, John owned one acre to the value of £150 in Allanton. He built the family cottage of sod which consisted of two rooms and was originally thatched. Around 1905 the roof was replaced with a galvanized iron one which enabled water to be collected into tanks. The earth floor was frequently covered with fresh straw to keep the place warm and dry through the winter months and Emily Sophia Pedofski, a granddaughter, recalls doing this task as a young girl. John was employed as a labourer and was naturalised as a New Zealand citizen on 14 November 1893.  He died at Allanton on 31 January 1913 aged 86.

‘He was lord on a horsehair style sofa, curtains were drawn and candles lit. All the woman folk (children included) gathered at his home. Once inside the praying started and would continue until the candles burnt out or some other sign was made. In this case the candles were very nearly all burnt out when a mouse appeared under the table, moved around the room once or twice then faded into the darkness. With that the prayers ceased for the day as they had witnessed the lord coming in one of his many guises to take the soul of the departed safely to his kingdom”.

Francisca was a quiet loving lady and known to everyone in Allanton as Granny. She was the midwife for the Allanton district and was required to be out at all times in all types of weather, usually accompanied by someone with a lamp to guide the way. Dressed in black she would wear a plain white collar and cuffs with a sack apron while doing her daily chores. In the afternoon she would then change to a lace collar and cuffs with a white apron for the afternoon. The grandchildren would come to visit granny Switalla after school where she would be sitting patiently in her rocking chair. In the pocket of her apron there would be some sweets for the eager waiting youngsters. Mona Todd, Granddaughter, recalls staying with her grandmother: – 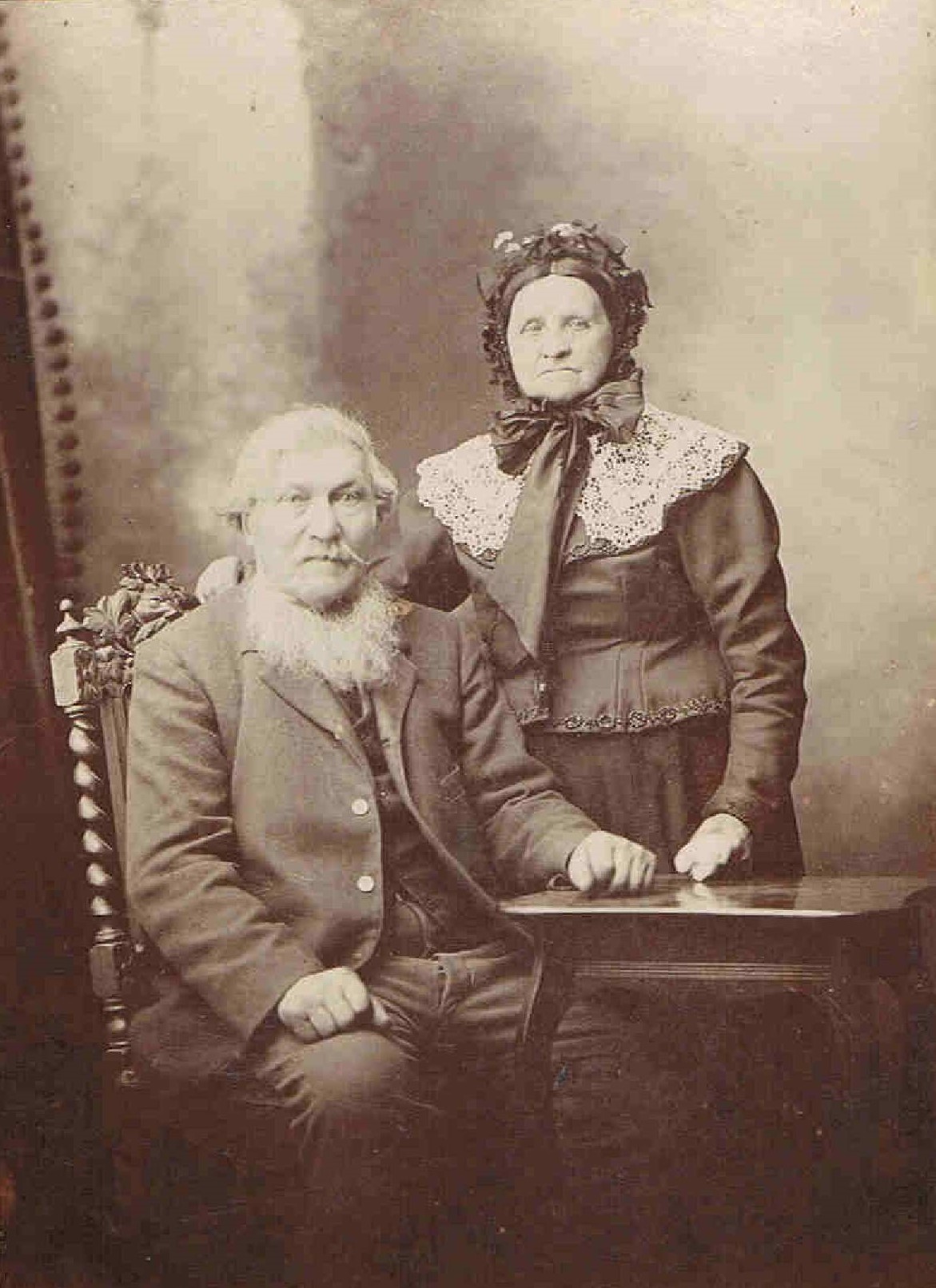 “Whenever we visited Granny, she would pat both cheeks and repeat “policzki, policzki,” (cheeks, cheeks). It was a common phrase in many Polish homes. All cooking was done over an open fire, which had iron bars on which a large black kettle was always boiling. It had an oven at the side in which cakes, scones and bread was baked. It was a real treat to turn the churn to make butter. Arms felt like dropping off but I never gave in. Then the best part was making the lump of butter into pats with two wooden pats lined and like two small tennis bats. Butter for the table was rolled into small balls or what they called rolls. There was a large garden where every kind of vegetable was grown. Apples, pears, plums and greengages, red and black currents, gooseberry and raspberries were among the variety of fruit grown. A few hens’ eggs were never in short supply. Parsnip and elderberry wine and apple cider were always made each year. There was a room at the back of the house where stores were kept. It had a stone floor and was always cold. Strings of onions and rolls of bacon were found hanging from the ceiling. Now and again Granny came to Dunedin for a few days and stayed with Mum. I always hoped I would look as elegant as she did in her very best clothes. These were kept in a tin trunk in the bedroom and only worn on a very special occasion. Taffeta petticoats were worn under her frock which made a swishing noise as she walked. A black frock, black boots which were buttoned on the side, black beaded bonnet and beaded purse, black gloves and cape completed the outfit. Granny always wore black. Black apron was worn to do the housework but, in the afternoon, a beautifully embroidered white apron was worn. She was always knitting, sewing, embroidering or doing crochet. I never saw a pattern but she did some beautiful crochet supper cloths.”

When Fanny had to go into the Little Sisters of the Poor in Dunedin, the sod cottage remained unlived in from that day. She died in Dunedin on 31 May 1925 aged 95. Johann and Francisca are buried together at the Allanton Cemetery. 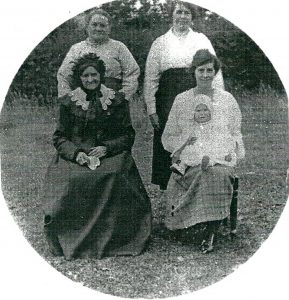 “DEATHS. SWITALLA.—On May 31, at the Home of The Little Sisters of the Poor, Anderson’s Bay, Francisca, widow of John Switalla, of Allanton; in her ninety-sixth year. R.I.P.” Otago Daily Times, 1 June 1925, p 6 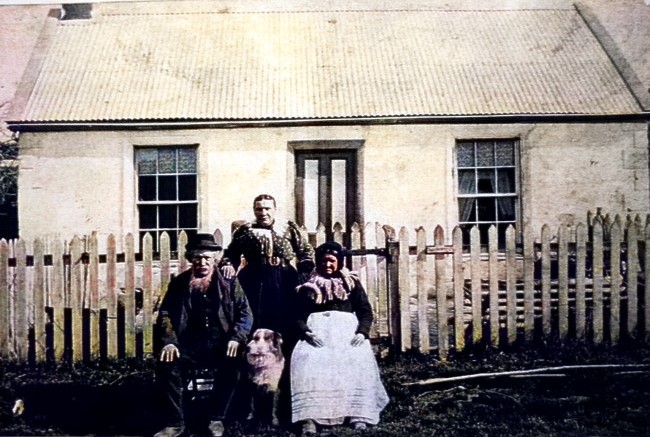 John died in Dunedin on 18 May 1933 aged 75 and is buried with his wife at the Andersons Bay Cemetery in Dunedin.

Michael Nicodem Świtala, who was thirteen years old at the time, may have died on the journey out as there is no documentation of him in New Zealand. 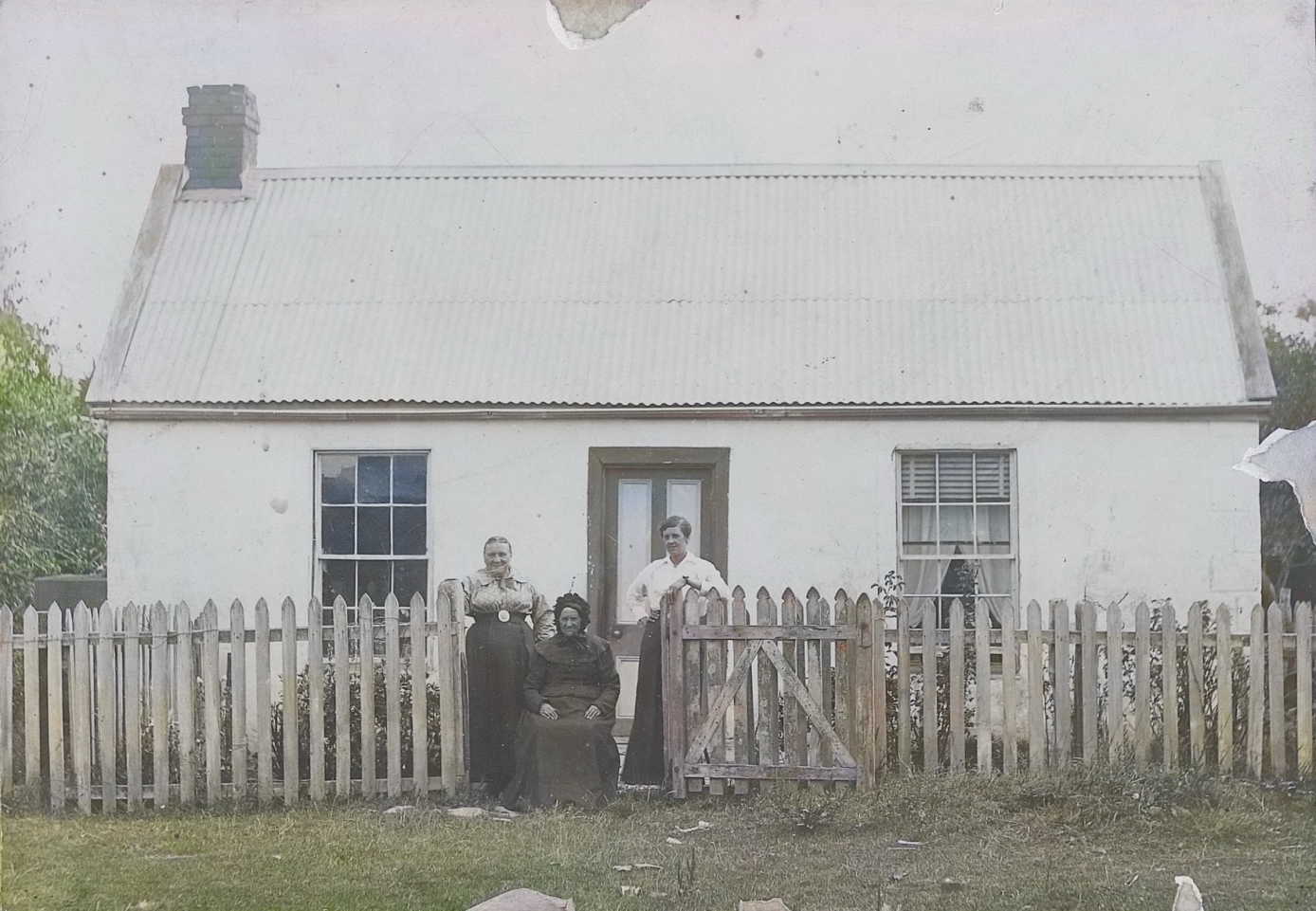 “Messrs J. Carroll and H. Calder were the presiding justices at the Police Court this morning, when James Casey was convicted of drunkenness and discharged. For failing to send their children to school at least six times in any week in the course of which the school is open nine times Angus Switali and Isabella Holland, brought up on two charges, were each fined 4s.” Evening Star, 26 October 1901, p 4

“THE COURTS-TO-DAY. MAGISTRATE’S COURT. (Before E. H. Carew, Esq., S.M.) Indigent Children.—Albert, John, Frank, and Margaret Suitalli, whose ages ranged from nine years, to one and a-half, were shown to be children in indigent circumstances, and committed to the Industrial School, to be brought up in the Presbyterian religion, the father to pay 2s 6d a week for the maintenance of each.” Evening Star, 16 December 1901, p 6

“CITY POLICE COURT. Friday, June 28. (Before Mr H. Y. Widdowson, S.M.) Maintenance. — Augustus Suitalli was charged with disobeying a maintenance order for the support of four children in the Caversham Industrial School, and being £93 in arrears to January 28 last—Defendant, did not appear.—Sub-inspector Norwood said defendant had promised to pay £1 per week last April, but had failed to do so. He would ask for a warrant of distress, the present proceedings to be withdrawn.—An order was made accordingly.” Otago Daily Times, 29 June 1907, p 3

MAGISTRATE’S COURT.  CHRISTCHURCH. Mr T. A. B. Bailey, S-M., presided at the Magistrate’s Court yesterday. August Switalli was charged that, being a registered alien, he did fail to give notice of a change of address within fourteen days. The defendant said he did not consider he was an alien, as he had come to the country when he was six years of age, and he had. three sons at the front. ‘The Magistrate said that unfortunately defendant was an alien in the eyes of the law, and must notify changes of address.  Defendant was fined 20s and costs.” Lyttleton Times, 17 October 1918. p 8

August worked as a shearer for Mt. Nicholas Station, a farm labourer, and a labourer for Halswell Quarries. He died at the Coalgate Railway Station on 22 July 1920 aged 56.

“ACCIDENTS AND FATALITIES. SUDDEN DEATH. A man named August Switalli, who has for some time past been in the employ of the Public Works Department at Lake Coleridge, yesterday dropped dead on the Coalgate Railway Station. He had intended coming through to Christchurch. Deceased was removed to the Coalgate Hotel by the police. It is likely that an inquest will be held at Coalgate today.” Sun, 23 July 1920, p 11

Foreground; Kovaleski’s and Antoni Velenski’s on corner and tree beside washing hole. Further back is Frank Switalla’s and the property of John and Fanny Switalla

Jacob Martin Switalla was born at Piwnice on 16 November 1869. He never married and resided at Allanton working at times as a butcher. Jacob, employed as a labourer, was naturalised as a New Zealand citizen on 14 November 1893. On Christmas Eve of 1921, Jacob became the victim of an attempted murder and suffered serious injuries due to the ordeal.  He became embroiled in an argument with his step-brother, Joseph, which it seems may have had jealous intent.  The event made headlines in all the papers and the NZ Truth, Assault With An Axe.  He died at Dunedin on 24 November 1934 aged 65 and is buried at the Andersons Bay Cemetery in Dunedin. 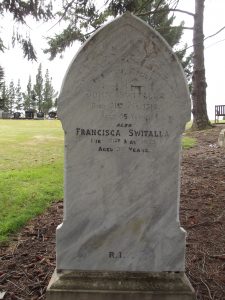 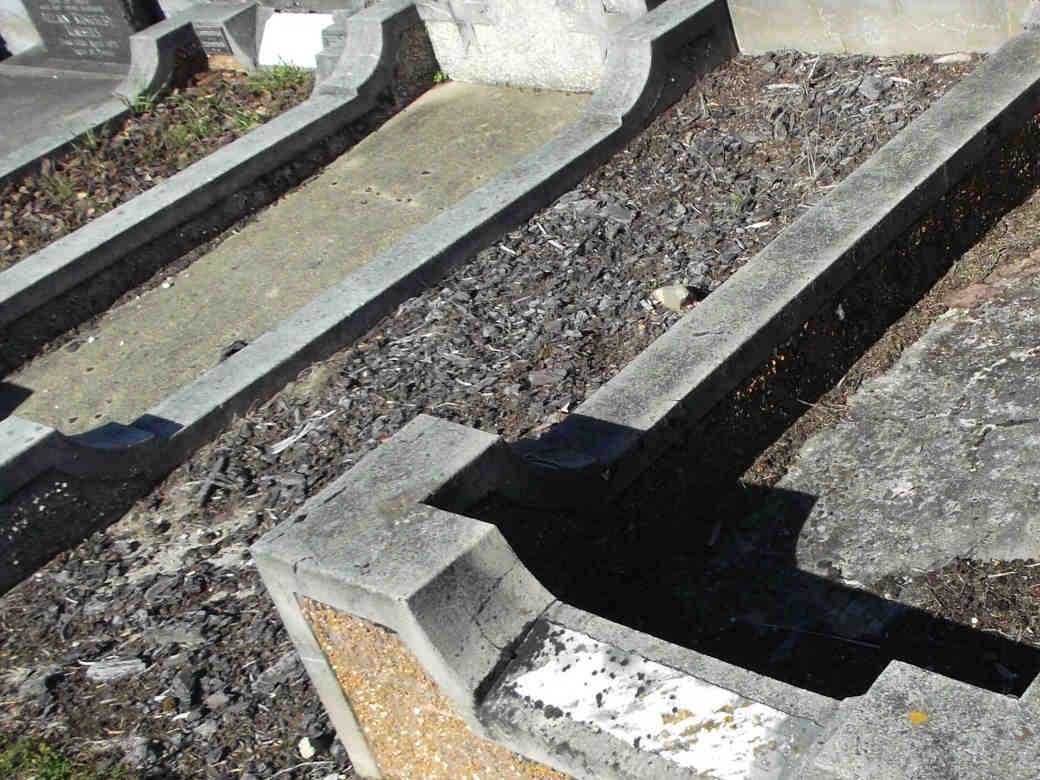 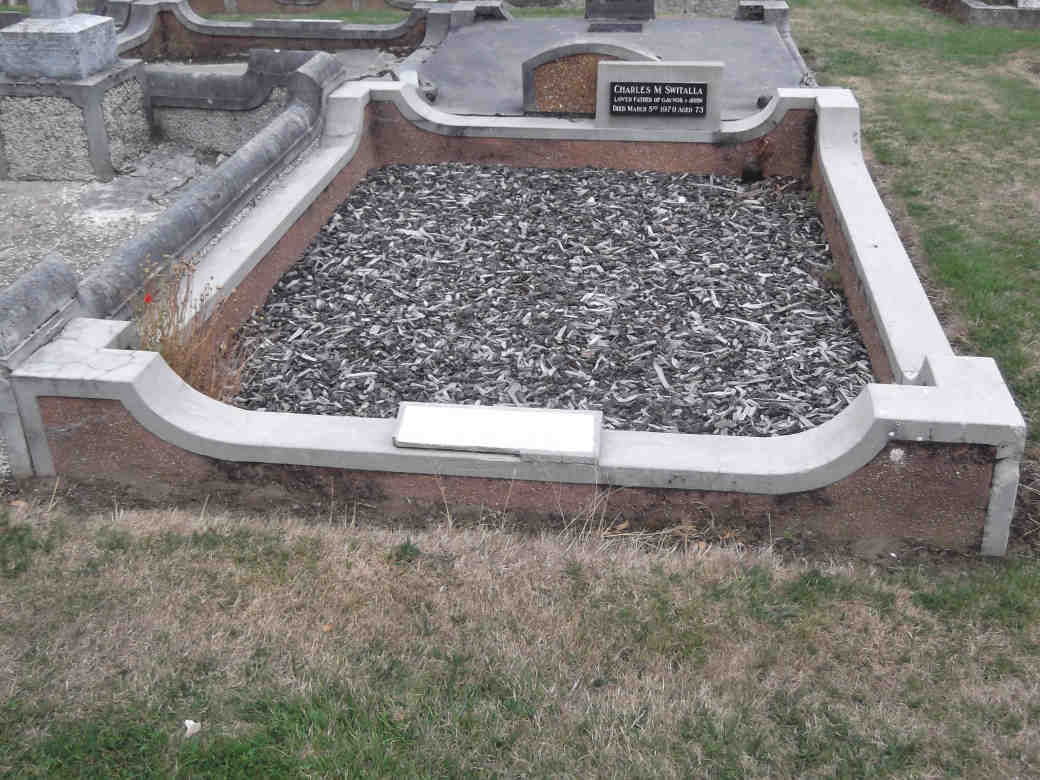