click on name or picture to go to Lubecki Family Tree at ancestry.com 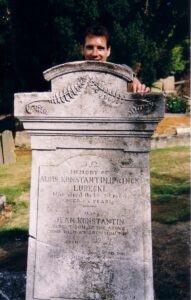 Lubecki, Alois Konstatin Prince, (b. 1801–d. 1864) was born at Warszawa, a descendant of the famous Norman Prince Ruric who was invited to govern Russia. His forefathers became Lithuanian Princes and became completely Polonized after the union of Poland and Lithuania. His grandfather Jan married a Polish noblewoman, nee Jodko, and held large estates at Volhynia, then a province in Eastern Poland. He was a cousin of Prince Xavier Drucki-Lubecki, an outstanding minister of finance in the Polish Government in the years 1821-30. Alois took part in the Polish-Russian war of 1830-31 as an officer in the Polish National Army and after the end of the fighting he emigrated, first to Dresden in German Saxony, where he fell gravely ill, and then to France and England.

Alois married in 1836 in London to Laura Duffus (b. 1814 at Sydenham, England–d. 1901), the daughter of Thomas Duffus and Susannah Gordon Berryman. Influenced by Laura’s brother, Rev. John Duffus, who also came to Australia on the same voyage, Alois and Laura set aboard the Eden arriving at Sydney on 17 October 1838. Noted as the first known Polish settler in New South Wales, they soon had a son—Jean Konstatin (b. 1838–d. 1865). In Australia he was unable to find employment and eventually the Lubecki’s opened a school on 1 October 1840. They soon joined forces with Laura’s sister Susan, wife of William Griffith, a London-born artist. The sisters established a school for young ladies at Gough House in Parramatta which was opened on 1 Jan 1841. The terms were – forty guineas per annum, which included English, History, Geography, Writing and Arithmetic. A separate charge of two guineas per quarter was made for pianoforte, singing and drawing, and one guinea for tuition in French, or dancing. The school was very successful at the start and Alois helped in the administration. Around this time, they had their second child—Alois Duffus (b. 1841–d. 1926). At the end of 1841 the colony was affected by a periodic depression, which brought a disastrous fall in revenue and in March 1842 the school’s owners became insolvent causing Alois to have a nervous breakdown. The family moved to Sydney where a son and two daughters were born—Laura Josephine (b. 1847–d. 1927), Stanislaus Napoleon (b. 1849–d. 1854) and Susan Alice (b. 1855–d. 1908). About 1858 the Lubecki’s moved to Victoria and lived at Heidelberg near Melbourne. In Melbourne Alois worked as a confectioner, while his wife was teaching. Alois junior joined the Victorian Civil Service on 1 January 1862 as a trainee operator for the Telegraph Office. On 1 April 1864 he resigned as General Service Operator in order to join his family in New Zealand where he obtained a position in the Telegraph Office and after a year became the officer-in-charge of the Dunedin Telegraph office, a post he held for thirty years.

Alois and Laura, with their daughters, sailed from Melbourne on 4 Jun 1863 on board the City of Hobart accompanied by another Pole, Theofil Dembicki. After landing at Port Chalmers the family settled in Dunedin. The old Prince named his new residence “Kłodno” after the battle he had fought in an engagement with the Russians. He liked to talk about those times and was known among his friends as the ‘talking General’. It is thought that Alois became a bank manager in New Zealand. Prince Alois Konstatin died at Dunedin on 7 October 1864 aged 63 and is buried at the Southern Cemetery in Dunedin.

“A notice appears in our mortuary column of tile death of one who fought and suffered in the cause of Poland in the Revolution of 1830-31. Prince de Lubecki, with many other nobles, on the suppression of their attempt to free their country from Russian dominion, was compelled to take refuge in England, where he married, and whence, many years ago, he emigrated to New South Wales. He has been resident in that colony and Victoria for many years, and after 16 months ago he arrived with his family in Dunedin. For some time back his health has been failing, and he died on Friday afternoon last, shortly after five o’clock.” Otago Daily Times, 10 October 1864