click on name or picture to go to Klass Family Tree at ancestry.com

Listed aboard were: Johann Klass age 57, Paulina 53 and Rosalia 16. They travelled south to the settlement of Allanton where John worked as a labourer and retired. Apollonia (Paulina) died on 27 December 1889 at Allanton aged 68.  Unable to make a living, John was institutionalised at the Otago Benevolent Institute (Tall Boys) at Caversham in Dunedin on 8 August 1898. John was discharged on 14 March 1899 and sent to the Dunedin hospital where he died on 22 April 1899 aged 81. He is buried with his wife at the Allanton Cemetery. 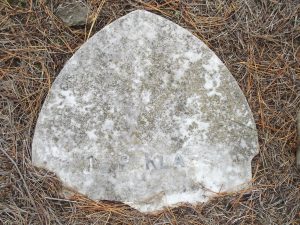