click on name or picture to go to Greca Family Tree at ancestry.com

ANYS/ANIS possibly from (Ger) Hans or equivalent Jan or from the son of Annis (Eng), the popular pronunciation of Agnes Meaning: Pure/chaste.

DEMER/DEMMER a variant from Dempster (Eng,Scot). Meaning: Occupational name for a judge or arbiter of minor disputes.

GRȨCA/GRENZ (Ger) grens. Meaning: Dweller near the boundary or frontier. 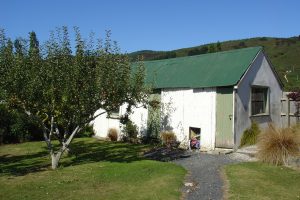 Old cottage on section 16 of block 19 at Waihola, courtesy of Paul Klemick

Listed aboard were: Martin Grenz age 44, Marianna 44, and Anna 9.  They were sent to Soames Island for isolation before being sent to Dunedin where they were sent to the western compartment of the Caversham Immigration Barracks. From here they travelled south to Waihola to join with family there where Martin purchased section 16 of Block 19 at Waihola on 21 Nov 1876.

“Resident Magistrate’s Court. MILTON. (Before E. H. Carew, Esq., KM.) Tuesday, August 27th, 1878. MACKAY V. BAUMGARDT AND OTHERS. These were claims of 5s damages for trespass. Mr Walter Taylor for the defence. The plaintiff, who conducted his own case, failed to prove that the defendants Baumgard, Grenz, and Aulaskl, were the owners of the cattle, which trespassed on his land. The other two defendants were fined 5s each and costs.” Bruce Herald, 30 August 1878, p 5

Marianna died at Waihola on 15 August 1880 aged 53 and is buried at the Waihola Cemetery.

Martin moved to Greytown (Allanton) where he purchased sections one and two of Block 11 on 1 March 1881. Martin then remarried on 27 March 1881 at the Church of Immaculate Conception in East Taieri to Mary Frawley (b. 1839 at Ireland–d. 1919), the daughter of Patrick Frawley and Bridget Hayes. He was naturalised as a New Zealand citizen on 14 November 1893 while working as a gardener, a resident of Allanton. Martin died on 9 December 1896 at Allanton aged 71.  Both Martin and Mary are buried at the Allanton Cemetery.