click on name or picture to go to Felski Family Tree at ancestry.com

Click ship to go to the Friedeburg ship page

“A QUARRELSOME COUPLE. [By Telegraph.] [from our own correspondent.] INVERCARGILL, Dec. 30. There is a settler in the Fernhill district named Jacob Falska: he has a wife and family, but has not lived happily with the former. Jacob says she is jealous of him, and makes his life miserable. The other day he got tired of the way matters were going on, and told his son, aged 11 years, on Sunday morning, that he was to go to the constable at Winton and tell him that he (Falska) intended to hang himself within twenty-four hours. The boy told the constable, who came to the spot, saw the man, did not think he was in earnest, and cleared out to make enquiries about a fatal accident to a boy named Ross, who had been run over by a train some miles away. After the constable left, Jacob went into the bush, made a line of flax, tied one end to a branch of a tree, the other end being formed into a slip knot placed round his neck. The branch was barely 4ft high, and Falska went down on his knees and drew tightly, pulling back. His little son stood looking on, and when, as he put it, he saw his father was “beginning not to breathe,” he pulled out a knife and cut the flax asunder. Jacob after this made two more attempts, and each time the boy repeated his part of the performance. After being at it half an hour, Jacob got tired and lay down to sleep. One of his daughters called a neighbour, and he took Jacob home. Jacob got drunk on some beer he had, and was taken to Winton by the constable. He was brought up at the police court on a charge of attempted suicide, but was discharged, the Magistrate remarking that Jacob was apparently only trying to frighten his family, and had no real intention to take his life. He advised Jacob to try and live amicably with his wife. Jacob replied that she had been quarrelling with him for nine years.”  Lyttleton Times, 31 December 1886, p 6

“The dwelling-house of Mr Jacob Falska, Benmore, was destroyed by fire on the 28th inst. The insurance, if any, is not known.” The Evening Star, 31 December 1891, p 2

“STACK FIRE. A small stack of wheat, belonging to Mr J. Falska, Fernhills, was destroyed by fire at 5 o’clock yesterday morning. The flames were first noticed by a neighbour, who says that had there been a bucket or two of water near at hand he could have extinguished them. There was no insurance, and the origin of the fire is unknown.– Winton correspondent.” Southland Times, 5 April 1892, p 2

“An Inquiry, conducted by Constable Rasmussen, was held at Fernhills on Wednesday, before Mr James Gilmour, J.P., acting Coroner, and a jury of six, of whom Mr M. Hishon was foreman, into the origin of the fire on the 4th inst. which destroyed a stack of wheat owned by Jacob Falska. After several witnesses had been examined the jury found that the stack had been set on fire by some person or persons unknown.” Southland Times, 16 April 1892, p 2

In 1893, Julia registered herself onto the Awarua Electoral Roll to be among the first woman in the democratic world to vote.

“Winton. (FROM OUR OWN CORRESPONDENT). At the Magistrate’s Court today the following business came before Mr Rawson, S.M…Nicolai Dalager v. Jacob Falska, a claim of 6s, balance of amount for building a stable. Judgment for defendant, who was allowed 6s costs…” Southland Times, 20 March 1894, p 4

“GENERAL NEWS. Some capital onions of first quality are on view at Messrs Lennie and Sons’ shop, Dee street, grown by Mr Jacob Falsky at Fernhills. It is a fact worth noting that he has grown nine tons of splendid onions or three quarters of an acre. There would be no need to import onions if all Southland was like Fernhills District. They were grown from Lennie’s tested seeds, and half a dozen turned the scale at 6½ lb.” Southern Cross, 18 May 1895, p 8

Juliana died at Fernhills on 2 April 1897 aged 62 and buried at the Winton Cemetery.

“THE COURTS. (Before Mr G. Cruickshanks, S.M.) ARDENS, OREPUKI, MAY 19th…  MAGISTRATES  Wm. Nicholson v Jacob Falska, claim £8, value of dog destroyed by defendant. It appeared that plaintiff’s dog had been worrying defendant’s cows, and he had destroyed it., —Plaintiff was non-suited with costs £1 7s…” Western Star, 22 May 1908, p 2

“Wallace County Council. The usual monthly meeting of the above council was held on Friday, and was attended by Crs Dyer (chairman), McNaughton, Hirst, Power, Affleck, Buckingham, Fraser, Ford and King. UNUSED ROAD. Mrs Falska, Orepuki, wrote asking permission to fence an abandoned road near Section 88, blk II Longwood. The road was of no use to anyone now, and she hoped the council would see their way clear to grant her request — Resolved that Cr Hirst be authorised to deal with the matter after inspection. A letter from the Commissioner of Crown Lands in connection with the application of Mrs Falska was received.” Otautau Standard And Wallace County Chronicle, 23 February 1909, p 3

“Wallace County Council. The monthly meeting of the above Council was held on Friday, the 16th inst., when there were present: Crs Dyer (chairman}, McNaughton, Hirst, Power, Affleck, Buckingham, Fraser, and King…CLOSING A ROAD. Mr Falska made application for road on section 88, block 11, Longwood. A report from the Chief Commisioner was received, pointing out that Mr Falska’s buildings were encroaching on the road, and that it was not likely they would be allowed to close road up. —Letter received “ Otautau Standard And Wallace County Chronicle, 20 July 1909, p 3

The Falska’s fine produce made regular mention in the local rag, gaining special prizes in the Southland winter show and A & P show. Jacob died on 4 Apr 1926 at Orepuki aged 87 and is buried with his first wife at the Winton Cemetery.

“On Sunday evening last word was received that another old resident of Orepuki had joined the great majority. The deceased, Jacob Falska, aged 87 years, was born in a village on the borders of Russia and Germany, and fought in the Franco Prussian war in 1870. In 1873 he emigrated to New Zealand, landing at Akaroa. He engaged in farming operations in various parts of the South Island, finally arriving in Orepuki 20 years ago, where he has resided ever since. Deceased leaves a grown-up family of two sons and three daughters to mourn their loss.” Southland Times, 8 April 1926, p 8 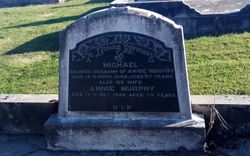