click on name or picture to go to Dunikowski Family Tree at ancestry.com 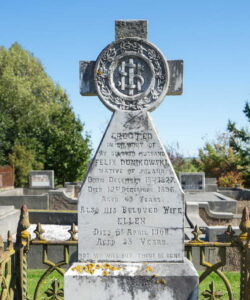 “RESIDENT MAGISTRATE’S COURT, LAWRENCE. (Before J. Nugent Wood, Esq., R.M) Monday, 3rd April. ASSAULT CASE. Dunikowski v. Campbell. — Mr Hunter for the plaintiff; Mr M ‘Coy for the defendant, who was charged with having on the 27th March unlawfully assaulted the plaintiff by striking him on the face; all witnesses were ordered out of Court. Mr Hunter opened the case at some length, and thereafter called Felix Dunikowski, who deposed that on the morning of the 27th, he saw the defendant in his yard, putting his horse into Johnston’s dray, which was standing there, and he went and told him that he could not let it go, as he wanted it. The defendant told him that he would have it, and was proceeding to take it when the (plaintiff) laid his hand upon the horse’s nose and pushed him back. Campbell then came and hit plaintiff in the face with his fist, and gave him a very severe blow in the eye. He attacked him in such a manner that he believed he was going to kill him, and witness called out to him not to kill him. — In cross examination, witness said he had known the defendant since 1858, and had never known him to be in Court. Had himself been in two or three cases previously in this Court, and had once been bound over to keep the peace. The doctor put the bandage on his eye. He did not have a stick in his hand, at the time of the assault. He only hit the horse with his left hand. He locked the gate to stop him taking the dray out. His daughter was present at the time of the assault. — Lilian Dunikowski (the plaintiff’s daughter), gave evidence to the effect that she saw the defendant in the yard, on the morning of the assault, getting the dray, and then he struck her father. She ran between them to save him, and got hit herself. He was overpowered by Campbell. In cross-examination she stated that it was not a fact that Mr and Mrs Dunikowski and herself all set on to the defendant. — Dr Maccarthy deposed to having treated the plaintiff, who had his face very badly scratched, and his eye was in a bad state and might develop into a cataract. In cross-examination, he stated that he had put the patch on the defendant’s eye. As there was a civil case arising out of the present case, the doctor’s evidence as to his probable charge was taken, to the effect that he anticipated the amount would be £5 5s. This was the plaintiff’s case. — Mr M’Coy, for the defense, stated that by rights his client. should have been the plaintiff, as Dunikowski was the aggressor. He called Alexander Campbell, who related the circumstances of the borrowing of the dray. On the morning in question, he went for the dray, and while he was putting his horse into it Dunikowski wanted to know what he was doing. He told him, and Dunikowski refused to let him have the dray, but on his proceeding to take it, plaintiff struck his horse on the ball of the eye with a fence rail and himself on the arm. He then bit the plaintiff; he did not know where. The wife and daughter of Dunikowski also set on to him, pulling him about etc. When at last he got out he went to Johnston’s, and told him that he could not get the dray. — Ann Campbell, the wife of the defendant, corroborated the evidence of her husband. — John Hogg was also called, but gave immaterial evidence. — His Worship gave as his opinion that a trespass had undoubtedly been committed, and consequently the defendant was in the wrong. the defendant was fined 20s; costs of Court, 9s; witnesses’ expenses, £1 1s; the amount to be paid within a fortnight.” Tuapeka Times, 5 April 1882, p 5 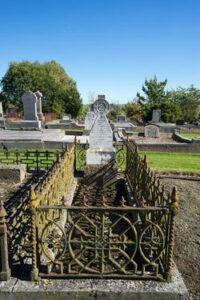 The Tuapeka Electoral Roll, records Felix as a miner residing at Evans Flat on freehold land being section 39 of Block three in Tuapeka East.  Felix died on 12 December 1896 aged 68 and is buried at the Lawrence Cemetery.

“A curious find was made by an old lady named Mrs Dunikowski, who resides in Oban-street, the other day. She was cleaning a somewhat aged fowl, preparatory to cooking it, when, on opening the crop, she found therein a half-sovereign, which, judging from the worn condition, had evidently been there for some time. It had a hole in it, having evidently been used as a pendant to a watch chain.” Tuapeka Times, 28 February 1906, p 3

Ellen died at Lawrence on 5 April 1908 aged 83 and is buried with her husband at the Lawrence Cemetery. 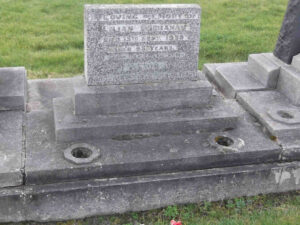 “A drowning fatality occurred at Tuapeka Mouth on Saturday night. It appears that a number of children were playing on the bank of the Molyneux River, when Ernest Percy Buchanan, aged 5 years, a son of Mr John Buchanan, slipped into the river and disappeared. The police in Lawrence were apprised of the accident on Sunday morning, when Constable Copple immediately proceeded to the scene and assisted a number of the local residents in dragging operations during the whole of Sunday, but without result.  Much sympathy is felt for Mr and Mrs Buchanan in their bereavement.” Tuapeka Times, 27 January 1909, p 2

Lilian registered onto the Tuapeka Electoral Roll of 1893, being the first among woman in the world to do so.  John Buchanan of Henley died on 30 August 1910 at Lawrence aged 48 and is buried with his parents at the Lawrence Cemetery. Around 1914, Lilian moves to Dunedin where she lives her remaining years.  Lilian died in Dunedin on 15 September 1950 aged 85 and is buried at the Andersons Bay Cemetery in Dunedin.